Ichiro Suzuki was playing in his final game after nearly 30 years in baseball and there was an excitement throughout the whole night, the anticipation of a story coming to its long-awaited conclusion.

He had been the the definition of baseball royalty throughout Japan, showing that his countrymen could compete at the highest level and prevail. And throughout the night the crowd continually showed their appreciation to the man the world has simply come to know as Ichiro.

It was quite a sight to see, a sold-out stadium of 45,000 coming to see one man’s farewell. Sure, some were there strictly to watch a live ball game, but the night belonged to Ichiro. Early in the game, it was announced that the man himself would hold a press conference after the game. Most assumed correctly that Ichiro would announce his retirement.

It was opportune – a MLB exhibition game plus one last chance for his home fans to see him play. At his every at bat, the crowd rose waiting for a reason to go wild. When it was time for him to run out to right field, it was time for another standing ovation.

...there was an excitement throughout the whole night, the anticipation of a story coming to its long awaited conclusion. 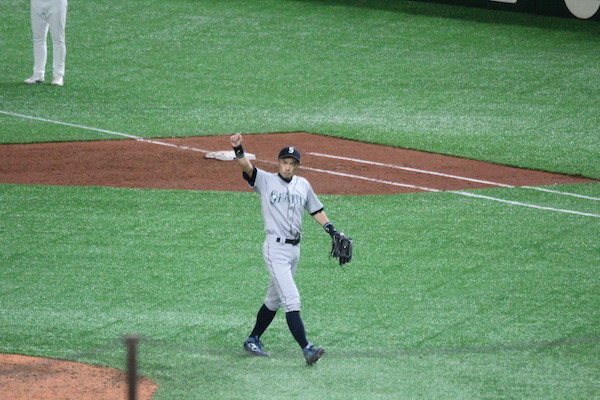 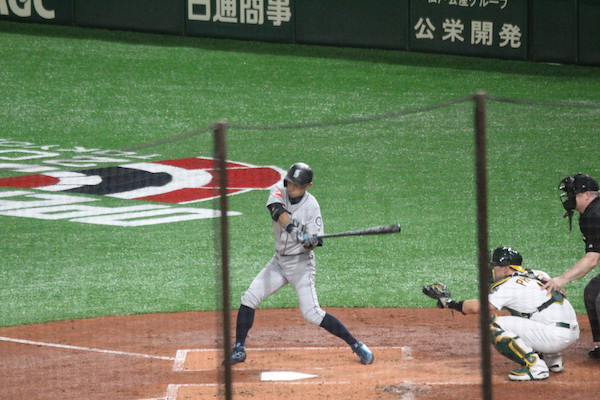 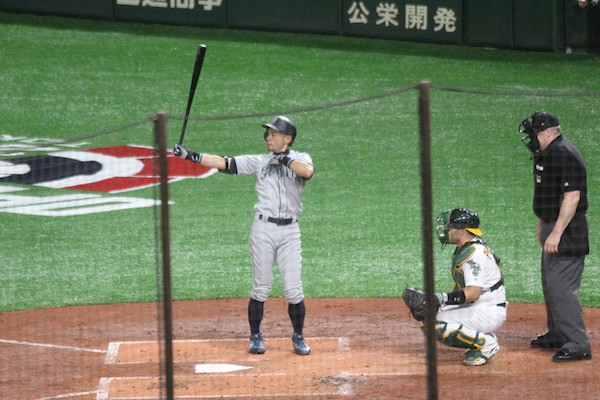 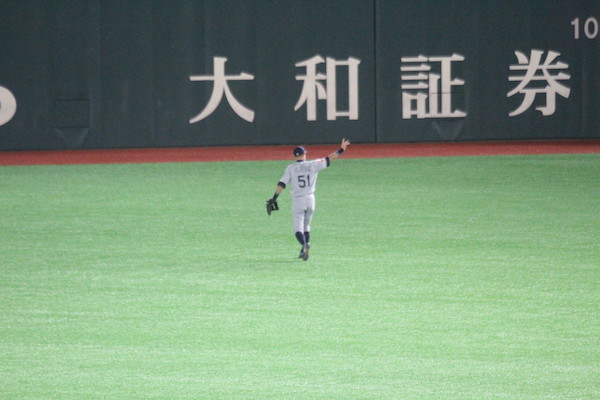 ...throughout the night the crowd continually showed their appreciation to the man the world has simply come to know as Ichiro.

The night was much deserved but Ichiro could not come through with a hit on the night, going 0 for 4 with one strikeout. The crowd was left to cheer for a handful of pop flies hit his way.

Ichiro’s best chance was in the eighth inning with the game tied, two outs, and a runner on second base. The entire stadium stood with anticipation, hoping a fairy tale ending was in the works for their beloved star.

The story book ending wasn’t meant to be as Ichiro hit a grounder toward second base and was barely beaten out by the throw to first. To end his final game, Ichiro was subbed out in the bottom of the eighth inning to yet another standing ovation.

As he hugged teammates and coaches, the crowd continued to cheer, some shouted their appreciation and others cried. Then he gave the crowd and final wave and was gone, walking into the tunnel for the final time. 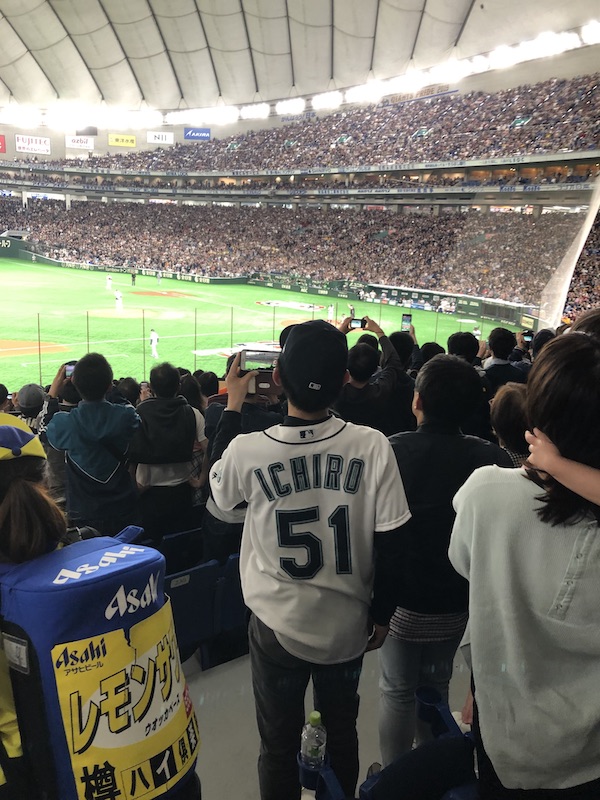 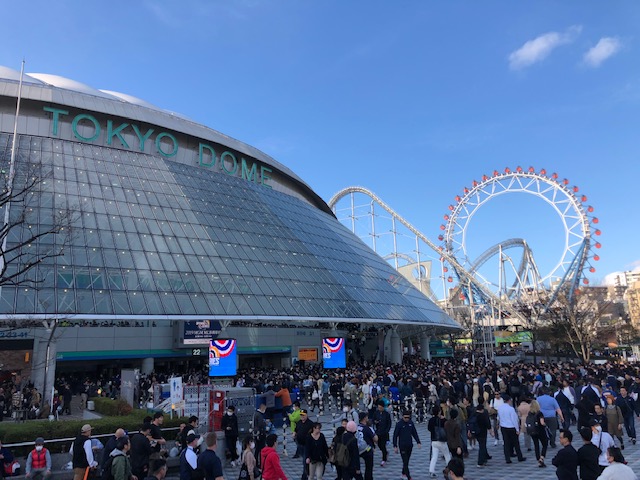 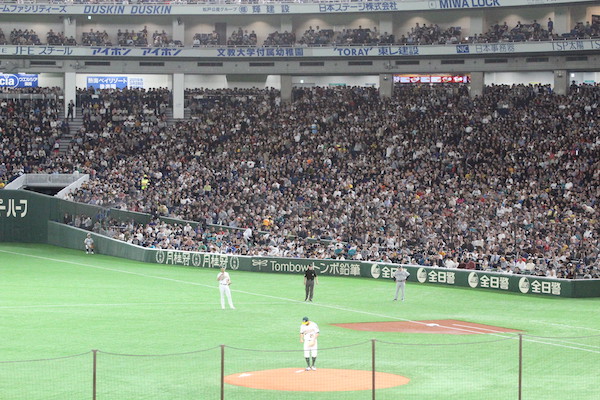 Attending a baseball game for the first time in Japan, even if it was a MLB game, was an electrifying experience. Coming into the game my expectations were high, I had read about Japanese baseball and the passion with which their fans watch the game.

My seats were along the third base line, about 30 rows up and gave a good view of the entire field. I was looking forward to experience the atmosphere firsthand.

The fans were extremely passionate and showed a lot of support for their countrymen out on the field.  Kikuchi was showered with cheers throughout his first major league start, and the crowd could not get enough of Ichiro.  Whether he was going out to right field or going up to bat, Ichiro received a standing ovation anytime he took the field.

If you are interested in purchasing tickets for upcoming games, there are a number of ways to get them.  Each Nippon League team sells tickets on their team website and about half of them have an English site.

There are also a couple English sites dedicated to selling tickets, such as japanballtickets.com and govoyagin.com.  Theses sites require a service fee and can be more expensive than the team website. Japanball does offer delivery of your tickets and will come to your hotel.

Another option is viagogo.com, a ticket resale site. Ticket resale is typically cheaper than other options and are useful for sold out games, but comes with some risk of ticket fraud.

This was the second game of the two game series the Mariners and Athletics were playing in Japan to start off the 2019 MLB season. On Thursday (March 21, 2019), the Mariners won the first game of the year, 9-7, with Tim Beckham and Domingo Santana both hitting homers to lead the team to victory.

With Mariners starting pitcher Yusei Kikuchi making his major league debut, Ichiro was not the only Japanese player taking the field. Kikuchi played well in his 4 and 2/3 innings, giving up one run while striking out three.

At the end of Kikuchi’s run the Mariners held a 3-1 lead, but in the seventh inning the Athletics tied the game off a Khris Davis double. The game remained tied until the 12th inning, when Santana’s ground out led to a Dee Gordon score. Mariners Hunter Strickland was able to close the Athletics in the bottom of the 12th to hold onto the victory. 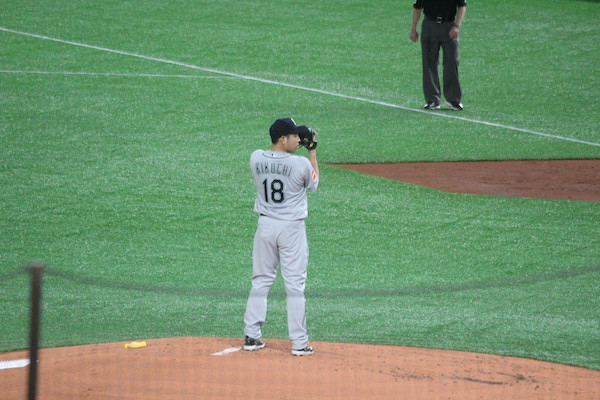 First, getting into the stadium was a bit of a challenge because of the number of people attending the game, all 45,000 of them. After finding my gate number and getting through the crowd, it took about 40 minutes to get through security. Even though it was very busy the staff does a great job of organizing each gate entrance.

Each gate line is organized to flow nicely and not interrupt each other, and a staffer holds a big sign at the end of each line showing which gate the line is for. Also the security is not very strict, and just quickly check your bag. An added bonus, unlike most US stadiums, outside food is allowed into the stadium. 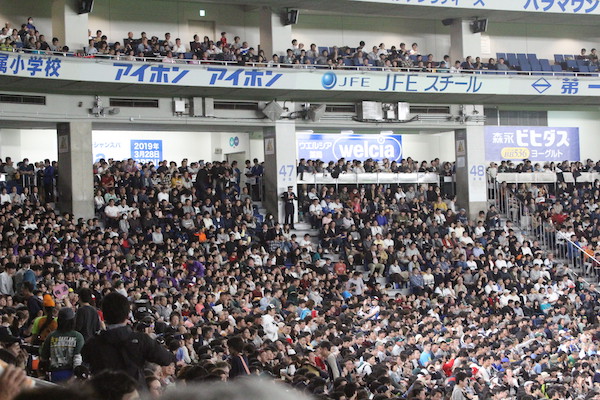 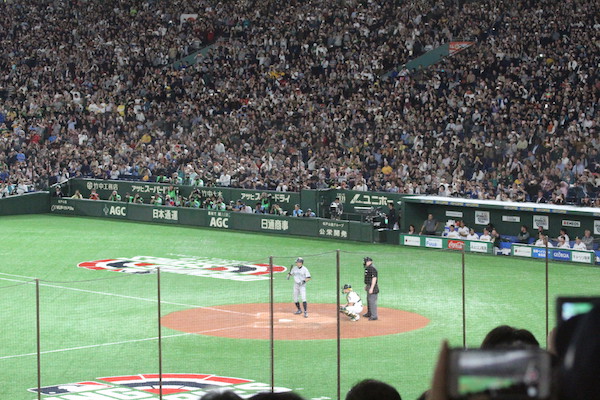 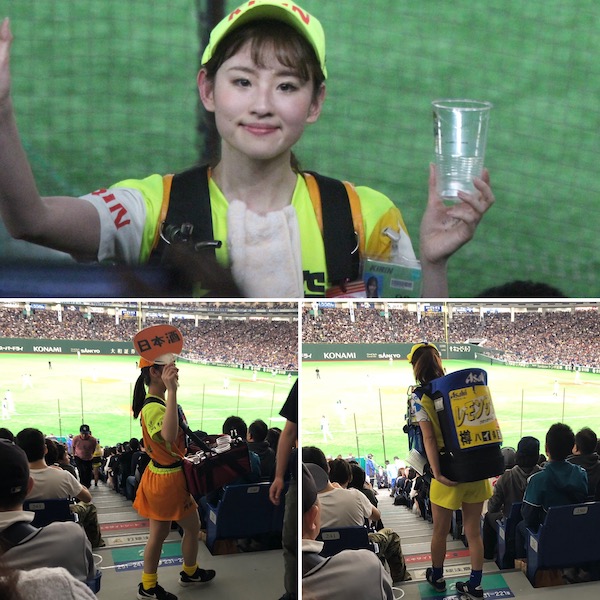 The most surprising and probably ingenious part of going to a game in Japan are the beer girls, or “urikko”. From the first inning to about the 7th or 8th inning, these girls walk up and down the aisles with kegs on their back. With no long lines to wait in, you don’t miss a second of the game.

Unfortunately, if you have a very thirsty individual seated in front of you (as was the case for me) the kegs can block your view when the uriko are serving someone in front of you. However, the benefits of the uriko far outweigh this small inconvenience and the uriko was one of my favorite parts of the game.

Once inside, it’s really like any other ball park – food stands, team store, and long lines leading to the bathrooms. While there were baseball staples like hotdogs, pizza, and fries, there were also options unique to being in Japan, such as bento boxes, curry, and yakisoba. 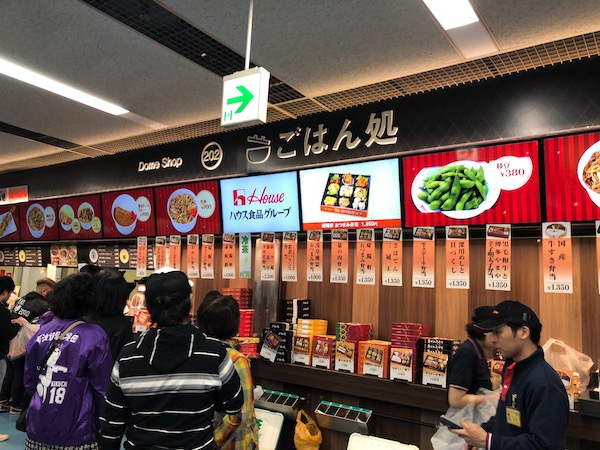