Following a year of venturing into the trail run world, Samurai Sports and race organizers KFC Triathlon have partnered together again in 2019.

But we’re changing it up!

First, we’ve put together all six trail runs under one umbrella title. The Tokyo Trail Run Race Series is a bit of a mouthful but it’s simple and easy to understand. You can learn more about each race here.

Second, we’ve increased your options so that you can register for the Series using a race pass system. Purchase one of the four race passes available and save money!

So whether you’re ‘just’ an enthusiast or a hardcore trail running junkie, the Tokyo Trail Run Race Series offers up to six mid- to long-distance races to supplement your calendar! Best of all, they’re all located within 90 minutes of central Tokyo (with the exception of Akagi and Tamagawa).

Before committing, make sure to read through “the finer details” section below to ensure you’re 100% clear on the terms of the race pass.

Finally, for the ambitious (or extrinsically motivated), we’re planning a commemorative piece for those who compete in all six races. Give it a shot – jump on-board with us!

click here to view more information about each race 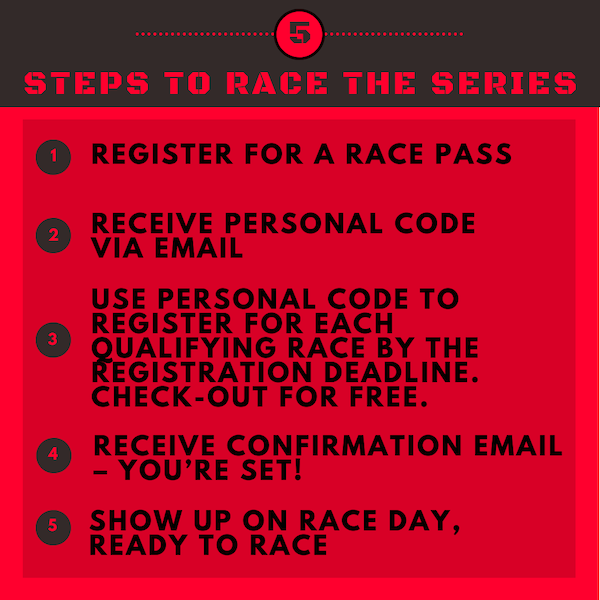 Why should I register with Samurai Sports?
If you aren’t fluent in Japanese (speak/read/write), it can be daunting to register for and participate in a sports event or race. A lot can happen before, during, and after a race – if you don’t understand what’s going on, you might find the whole experience very stressful. Samurai Sports offers race support and relevant services in English, including:
When is the last day I can sign up for a race pass?

The last day to register for the Six-Pack and Six-Pack Max is February 10, 2019.

The last day to register for the Three-peat and Three-peat Light is June 1, 2019.

How does the personal code work?

After signing up for a race pass, you will receive a personal code for use to register for the races your pass qualifies you for. We’ll start spitting out personal codes within 1 to 2 business days.

When you are ready to register for a race, simply input your information as you normally would. Before you proceed to payment, type in your personal code in the “Discount Code” box. Your total will amount to ￥0.

Click “Proceed to Payment” and confirm your registration. You’ll immediately receive a confirmation email. If you can’t find it, check your junk folder. If you still can’t find it, email us (info@samuraisports.co.jp).

IMPORTANT: If you accidentally pay for the race by credit card (thereby forgetting to utilize your race bundle), Samurai Sports will NOT process refunds for the individual race entry nor will we entertain partial refunds for your race pass.

How many times can I use my personal code?

Each personal code can only be used once per race that your race pass qualifies you for. That means you’ll use your code three or six times, depending on the pass you purchase.

You may not split the race pass or use your personal code to register different individuals to run separate races. If we notice that you have opted to ignore the rules (also see, “Can I split the race pass among two or more individuals?”), neither you nor the registered individual will be running. We will also void the remainder of your pass.

Chances are high we will notice discrepancies. This is one of those cases where sharing is not caring.

Can I share the race pass among two or more individuals?

No, each personal code is assigned to a specific individual (you, the buyer of the race pass). You may not use the personal code to register someone else.

Samurai Sports will not honor registrations in which the registrant’s name and the name belonging to the personal code conflict. Discrepancies will void the remainder of your race pass. Neither you nor the registered individual will be running.

When do I have to register for each race by?

You must manually register for each race your pass qualifies you for by the registration deadline for each race.

Requests for race registration past the deadline will not be honored. No exceptions.

I've already signed up for Ome, can I still register for the six pack? Will I get a full or partial refund?

You can still register for the Six Pack or Six Pack Max. However, you will not receive a refund for Ome nor will we refund a portion of your race pass.

If you’ve already registered for Ome but are keen to do all six races, we recommend you register for two more races separately and purchase the Three-Peat or Three-Peat Light to cover the three remaining races.

What do I get for participating in each race?

Generally speaking, races in Japan tend to be minimalists in terms of participant and finisher entitlements, especially regarding personalized items to bring home.

The KFC Triathlon Club race organizers are no exception. Participants will receive a small gift, such as gloves or a towel. Some (but not all) races offer a race t-shirt.

Upon completing the race, you are entitled to collect a finisher’s certificate printed on the spot and sometimes, a bowl of food, i.e. a Japanese dessert or hot, savory soup.

What do overall or age group winners receive?

Most races award the overall top 6 (men/women), and age-group top 3 (usually categorized as men/women below 39, 40-49, and 50+). Age groups and awards may change among each individual race.

I registered for a race but can't go anymore, can I swap races?

Yes, you may rescind and swap a race registration, provided the following two conditions are fulfilled:

1. There is at least one other race remaining in the 2019 Tokyo Trail Run Race series (it cannot be Hachimine)

2. You inform Samurai Sports via email of your intent to rescind  registration on or before that specific race’s registration deadline

You do not need to specify the race you will swap registration for. You remain responsible for registering for all races you intend to run using your race pass.

Do I get anything for completing all six races?

Yes, we’re working on a personalized commemorative piece for participants who finish all six races of the Tokyo Trail Run Race Series.

I'm a podium regular, how can I stay in the running to be Tokyo Trail Run Race Series Champion?

To be clear, you don’t have to be competitive or a podium-hunter to participate in the Series.

But if you regularly podium, you might be in the running to be Series Champion. In the big picture, you simply need to earn as many points as possible. Finish first and receive 10 points, second gains 9 points, so on and so fourth until you get just one point for tenth place.

Throughout the year, points will be compiled by KFC Triathlon, who will finally crown a male and female Series Champion at the final race of the Series (Hachimine).

It is not mandatory to run every single race. Your chances of accumulating points however, obviously increases by doing all six races (rather than sitting out one or more).

Can I get a refund?

No, Samurai Sports will not be processing full or partial refunds for purchased race passes. This applies for all circumstances, including injuries, sickness, transportation problems, inclement weather, etc.

It isn’t that we are jerks, it’s that most of what you pay goes to the race organizer and we play by their refund rules.

I'm PCSing or have temporary duty abroad. Can I get a refund? (US Military Only)

Samurai Sports may make rare exceptions for active duty, DOD civilian, or military family. Politics aside, we are considerate of Japan’s largest expatriate population and we understand that Uncle Sam throws curveballs.

Email us (info@samuraisports.co.jp) to discuss a fair and logical agreement.