A Beginner’s Guide to Riding in Japan

"Try not to get arrested."

Though the large majority of Japan commutes using public transportation, the roads that connect the villages to the cities and the urban dwellers to the suburban sprawl are generally considered safe and in pristine condition. Surprise! A third world country this is not.

Whether you’re riding a mamachari or a road bike, it’s easy to explore Japan on a bicycle. In fact, bicycles oftentimes enable us to access the hidden local gems, including family-run restaurants, tucked away temples, and cute shops. Perhaps most importantly, cycling allows you to skip the hassle of overcrowded trains. However, it’s important to note that cycling in bigger cities like Tokyo, Osaka, or Kyoto can be very different from cycling in say, Amsterdam or St. Louis.

Generally speaking, riding in Japan follows simple and universal rules – but some things are unique to Japan.
We highlight what you should know to make your ride in Japan safe and enjoyable!

The Sidewalk is For You. The Road is For Me. Except When It's Not.

Bicycles in Japan are categorized as small vehicles, which means you need to follow all traffic laws when you’re on a bike. That means you should also be riding your bike on the road with vehicles.

However, there are some exceptions.  Children under age of 13 and senior citizens over the age of 70 are allowed to ride on the sidewalk. Additionally, sidewalks with a blue round sign indicate that bicycles are permitted on the sidewalk. Riding alongside pedestrians requires extra caution as the sidewalks can get very crowded. Keep in mind that pedestrians have the right of way.

Stay In Your Lane (Kind Of)

Bike lanes are not uncommon on main streets, especially in the city. However, bike lanes are often rendered useless by parked cars. Unfortunately, bike lanes here simply mean riders are prioritized and cars are not legally bound to the boundaries of a bike lane. If there is no bike lane, cyclists are required to ride with the flow of traffic. In Japan, that means you ride on the left side of the road.

You see them all the time on traffic poles or written directly on the roads.
止まれ
In Japanese, it reads as tomare.
It means stop.
No California rolls, you need to come to a full stop and look both ways for oncoming traffic before proceeding. 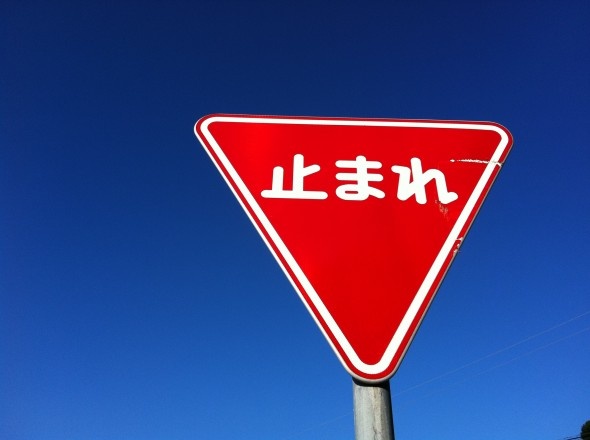 Bikes on a Train

Passengers may bicycles aboard trains, including shinkansen as long as two conditions are fulfilled.
First, bicycles must be partially disassembled. At the very least, the front wheel must be removed.
Second, all bicycles must be in a bike bag. This is primarily meant to keep the passengers and train clean.
These ubiquitous transportation devices are referred to as rinko bukuro or rinko and they usually come with more cable straps than Christian Grey would know what to do with. They’re available online and at most bike shops; prices start at about ¥3,000. 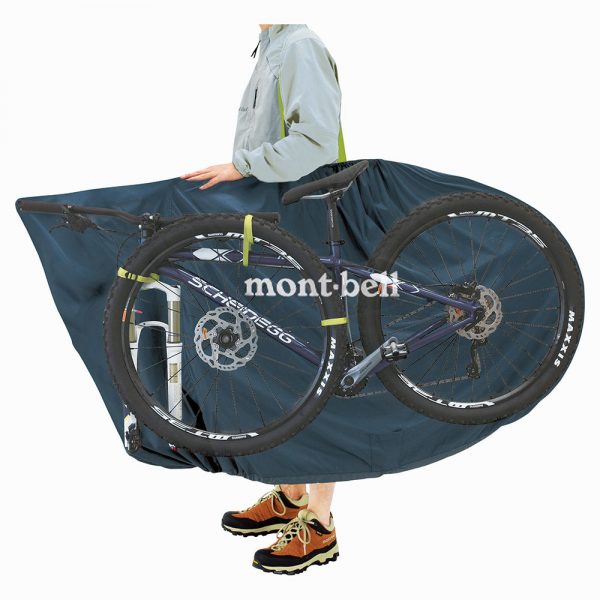 It’s stupid dangerous to be listening to music or looking at your cellphone while riding.
Same goes for umbrellas.
All three are technically illegal.
Honestly, this isn’t the time to be multi-tasking.

On the same note, your bike should have a functioning bell and headlamp.
They aren’t for decorative purposes.
Use them wisely and appropriately.
Helmets are not required – unless you’re at a cycling event.
That said, we advise you protect your noggin (especially if you’re on a road bike).

Making Right Turns
Ok, this part is a little annoying. Basically, it’s illegal to make a right turn in one swift go (even if the light is green). It’s very tempting, especially when it’s a protected right turn but in our experience, the police seriously enjoy calling out cyclists on this one.

Whether there’s a traffic light or not, cyclists should first cross the street straight ahead then come to a stop. Only when the light turns green should you then turn right. If there is no light, check for oncoming traffic before proceeding.

RUI (Riding Under the Influence)
Japan has a very unique drinking culture and having a few drinks after work is no big deal. Going to the local watering hole or izakaya is a great way to socialize with the locals and sample casual Japanese cuisine.

Be warned however, that riding a bike under the influence (of alcohol, or anything really) is considered a serious offense. Whether it’s a post-work happy hour or all-night rager, forget riding your bike home. The walk home will sober you up.

Across the Tracks
Japan has an extensive (and very convenient!) train network combining both underground and above-ground rail tracks. You will come across many railroad crossings complete with flashing lights, loud noises, and gate arms.

Trains absolutely do not slow down at crossings so unless you have a death wish, you shouldn’t even attempt to cross the tracks when the lights begin flashing and your ears start ringing. Note that smaller locales often do not have gate arms at all.

Due to a lack of space, parking in larger cities can be a challenge. In a city like Tokyo, finding suitable parking can be downright overwhelming. However, at most train stations, parks, and shopping centers, there are designated bicycle parking areas or garages. Like a car, you’ll want to take note of where you parked and don’t walk away without locking it. Similarly, depending on the area and the amount of time, parking may require a small fee, while other areas are free. 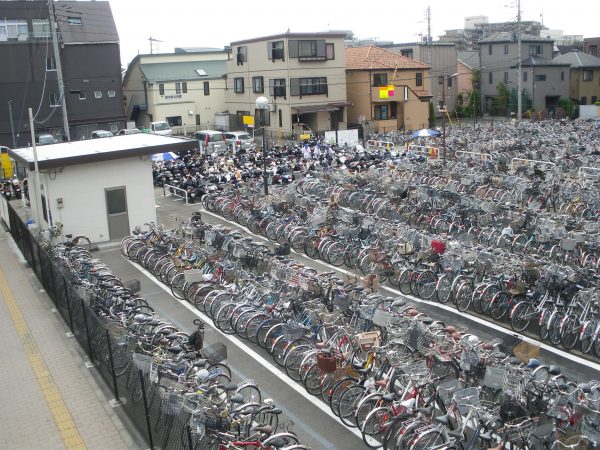 Oftentimes, bikes are parked and/or locked on the sidewalk or a random railing. There’s nothing like coming back out to a sidewalk cleared of bicycles. In Japan, authorities have the right to cut your lock and transport your bike by truck to a nearby garage – we call it “bike jail”. Depending on the area, you’ll have a period of time to claim your bike and pay a fine to retrieve it. Otherwise, all bikes go to heaven. 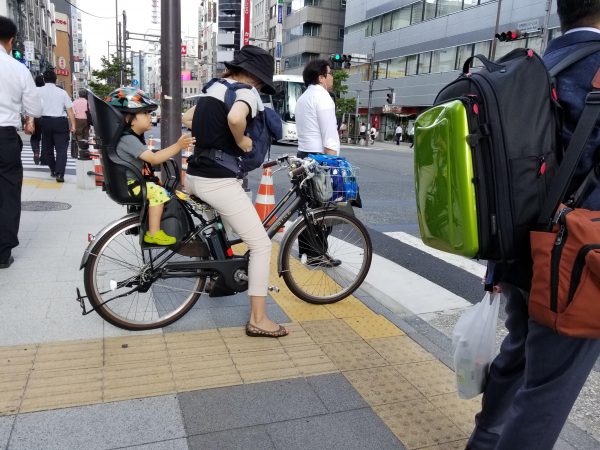 Riding Solo (Or Not)

The rules vary for each prefecture, but a designated child seat can (and should) be attached to either the front or the rear (both is also acceptable if you have two munchkins) of bicycles. Now, you can’t just go and modify your road bike – it’ll have to be a mamachari (literally, mom’s bike). Infants are generally allowed to sit in the front, while the older child (under the age of 6) sits in the back.

The rules vary for each prefecture, but a designated child seat can (and should) be attached to either the front or the rear (both is also acceptable if you have two munchkins) of bicycles. Now, you can’t just go and modify your road bike – it’ll have to be a mamachari (literally, mom’s bike). Infants are generally allowed to sit in the front, while the older child (under the age of 6) sits in the back.

You’ll see people do it all the time but riding with a passenger (with the exception of children in child seats) is illegal. Whether the passenger is standing precariously or sitting on that seat atop the rear wheel, it’s all no bueno.

Finally, don’t ride side by side. Leave that toilet paper under or over debate for when you all aren’t on bicycles.

Two Strikes and You’re Out

There are many koban (loosely, police stations) and police officers patrolling the streets. You might not see them all the time, but they see you. The police in Japan are generally very kind and fair. They don’t carry guns and donuts do not seem to a part of their food pyramid.

Foreigners that do not speak Japanese usually do not get cited for minor bicycle rule violation. However, the police still have the right to register your name in a magical database if you violate a bike rule. If you are caught a second time, authorities have the right to confiscate your ride and you’ll have go through a long safety program before you are allowed back on a bike again. We don’t recommend you testing their limits.

It seems like a lot of rules but for the most part, they make sense and they’re instituted to keep us all safe and ya know, alive.
Keep calm and ride on.

For more glorious explanations and visuals of Japanese traffic safety rules, refer to this manual.