Races are Back and the Mountains are Calling

Throughout 2022, events ranging from marathons, trail races, and triathlons are slowly appearing back on the calendar around Japan. I feel like a major turning point to some normalcy was the 2021 Tokyo Marathon held in early March this year (2022). Coinciding with the gradual decrease of the omicron Covid variant, springtime ushered in a renewed sense of confidence amongst domestic race directors.

One such race that was back for 2022 was the annual Nariki Forest Trail Race, which takes place in the mountains of west Tokyo, put on by the seasoned trail race veterans at the KFC Triathlon Club. The race venue is also home to the headquarters of the organizers and a cozy little cafe, Nariki Garden, nestled in the mountains of Ome city.

My Story Behind the Race

The 2022 Nariki Forest Trail Race was my first time tackling a trail race, so I was plenty excited. Like a lot of people, I had gotten deeper into running during Covid lockdowns. When events started popping up again I was eager to test myself against courses and other runners. I had previously completed a road marathon earlier in the year and was ready to get into the mountains for a new test. Coming from mostly running the streets for the past couple years, a trail race seemed a perfect opportunity for the variety and challenge I longed for as a runner. (although my still aching quads may beg to differ!)

To preface, I come from Canada. I grew up with an appreciation for the outdoors and love the trails, forests and mountains. Despite the abundance of nature throughout Japan, I’ve spent the bulk of the past 12 years in the suburbs of northern Chiba prefecture, surrounded by rice fields and flatlands for miles. Unlike my previous life in Canada, there are fewer opportunities to get out into nature from right outside my door. 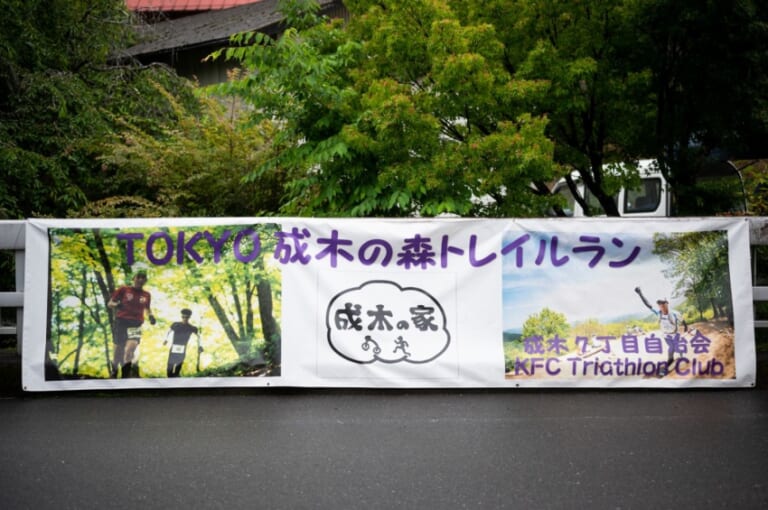 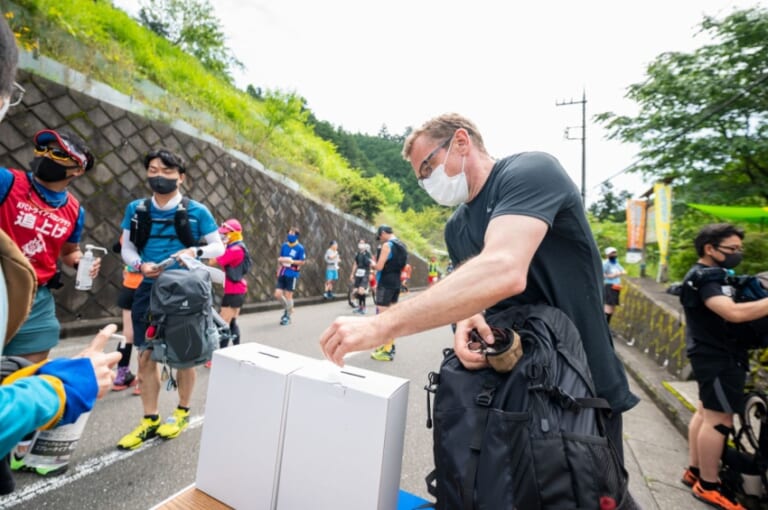 Registering for Races in Japan:

Why I Chose Samurai Sports

You may be asking yourself, since you’ve been living in Japan for 12 years, why would you sign up to a race through Samurai Sports? The main reason was the simplicity of everything.  For English speakers in Japan or for those visiting Japan in the future, the whole process of entering races through Samurai Sports is done entirely in English.

Then a week or so before the race, they deliver to your inbox a detailed athlete guide with everything you’ll need to know, from getting to the venue, things to bring, where to look for announcements, when the results will arrive and more. They really take all the worry out of the process and allow you to focus on training and racing instead of worrying about race logistics in a foreign language. 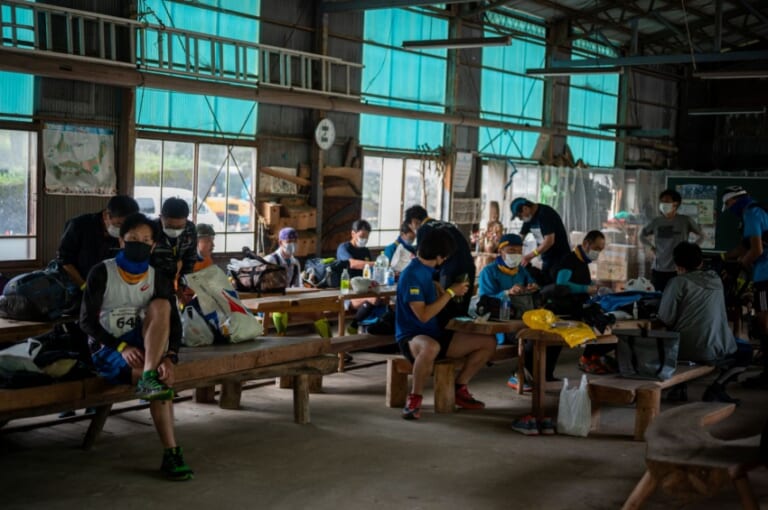 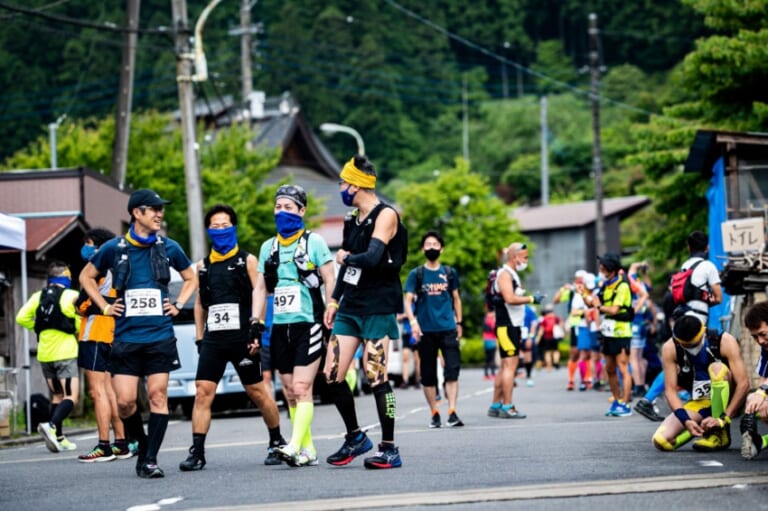 Getting to the Start Line

For those who live in the Kanto area, this race is a breeze to get to. It took me a little under 2 hours to get to Kabe station, which is on the Ome line, west of Shinjuku. For Tokyoites, the trip could easily be made in under an hour by taking the Chuo express line and transferring at Tachikawa. When I arrived at Kabe station there were plenty of other runners and KFC staff to guide us to the South exit of the station where shuttle buses whisked runners to the venue. 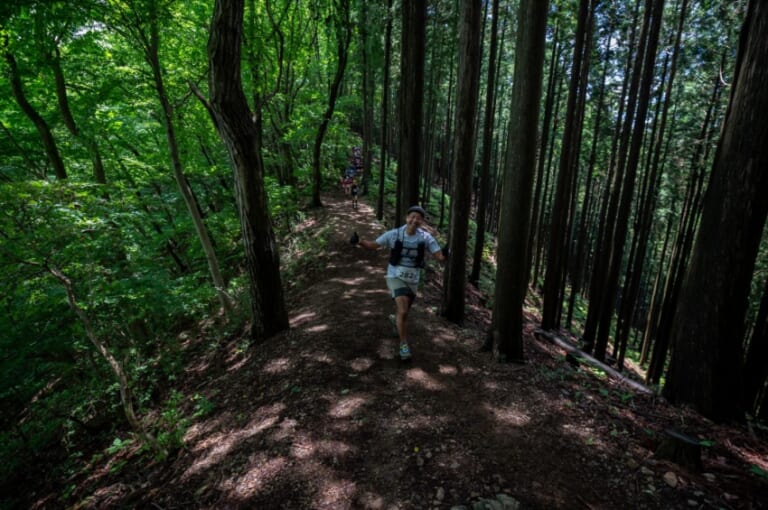 The Course, My Race Experience, and Advice

This year’s edition of the race took place a little later than usual, in mid-June as opposed to mid-May. Typically, Japan experiences heavy rainfall during this time of year, so the likelihood for downpours was strong, as such I prepared for inclement weather. Thankful torrential downpours were avoided, but we did have some showers and even thunderstorms near the end of the race.

The Nariki Forest Trail Race course is very mountainous and is rated 3 out of 5 in terms of difficulty by its organizers. This year, owing to its new race date in the midst of Japan’s rainy season, there were  slippery slopes and technical segments requiring hiking, jumping, and climbing – sometimes, on all fours. There were flats, steeps, peaks, mud, pavement, rain, sun, lighting strikes, fog and more. There were also scenic views with wide open space and bottlenecked climbs, being stuck behind dozens of runners. Due to such challenges, I am hesitant to recommend it as a first trail race for beginners.

At the same time, while Nariki is no walk in the park, the 4 hour 15 minute cutoff time is generous. Theoretically, one needs to cover about 4 kilometers per hour to complete the race. However, athletes also need to pass the 12km checkpoint in 2 hours 10 minutes. On this mountainous course, the elevation gain (about 800 meters) must be considered in guesstimating the appropriate pace to make the initial 12km cut off time.

Ironically, the course features a long, but scenic slog up the first 12km or so. I took a conservative approach in the early goings of the course which included many of the climbs and steep segments. In the latter half, I felt more comfortable emptying the tank and for the last four kilometers, letting it rip in some of the downhill sections through rain, fog, and thunder. It was equal parts thrilling and terrifying, knowing full well that a wrong step could send me tumbling.

Before I knew it I was back on flat(ish) ground and crossing the finish line. I was happy to join the other finishers in complementary yakisoba noodles and Coca-Cola! Other racer perks included a souvenir t-shirt and face buff. 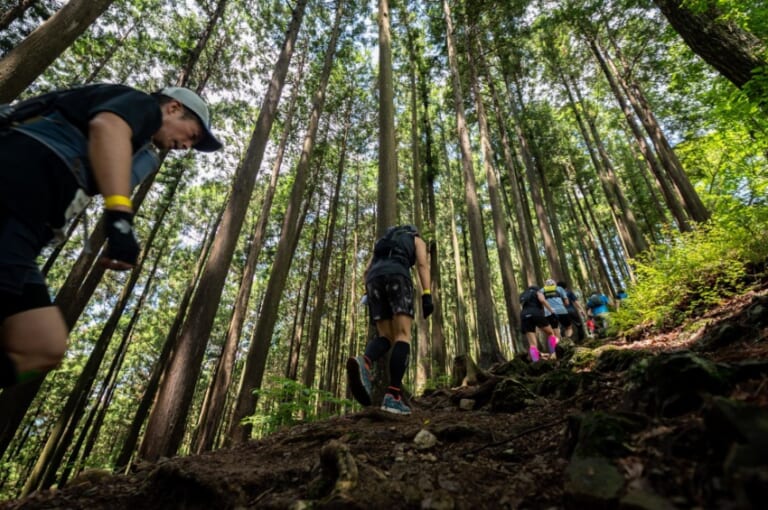 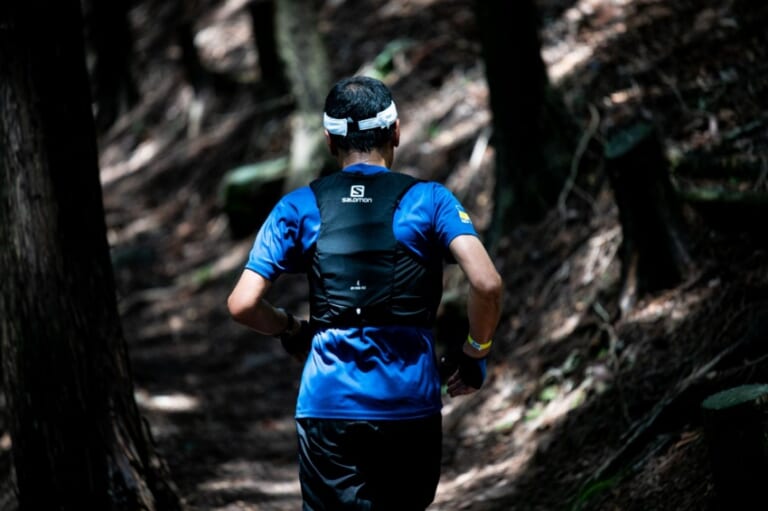 What Did I Learn?

It’s difficult to train for trail races solely using treadmills or pounding the pavement, so if possible  I recommend running the Nariki trails in advance and becoming familiar with the course, the distance, and the elevation gain. If you’re unable to get to Nariki, I’d at least recommend heading to forest or mountain trails with some elevation and getting used to the terrain.

Another tip would be if you feel like you have a handle on the course and the pace you can push, try to start a bit ahead of the pack at the beginning.  If you decide to push the pace later on as I did, it often becomes very difficult or near impossible to pass other runners. There are sections that bottleneck, you will inevitably be hiking single file behind a number of runners, at mercy to their speed.

One requirement of the race was carrying 1,000ml of hydration and wearing gloves on the course. In hindsight, I understand and appreciate the need for such requirements. At the start, the gloves seemed unnecessary; but as we continued on, they became essential. Throughout the course, I grabbed onto trees, rocks, roots and more. Time and time again, I also witnessed dozens of runners taking a spill. The gloves not only provided extra grip, they also protected my hands. 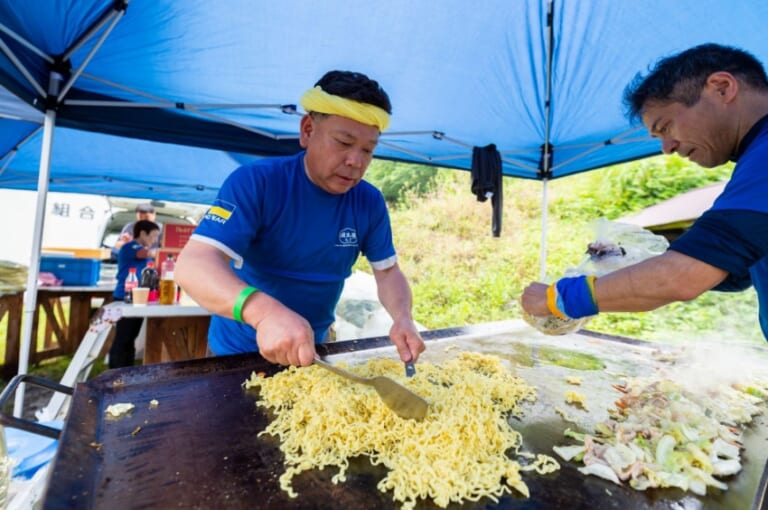 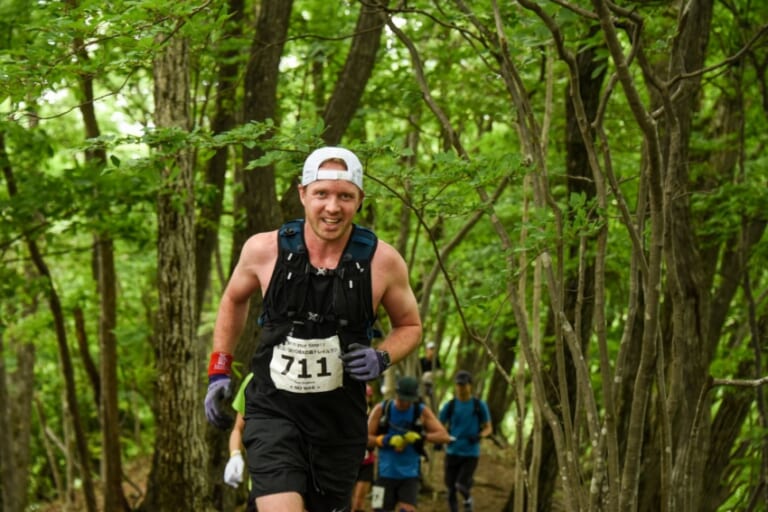 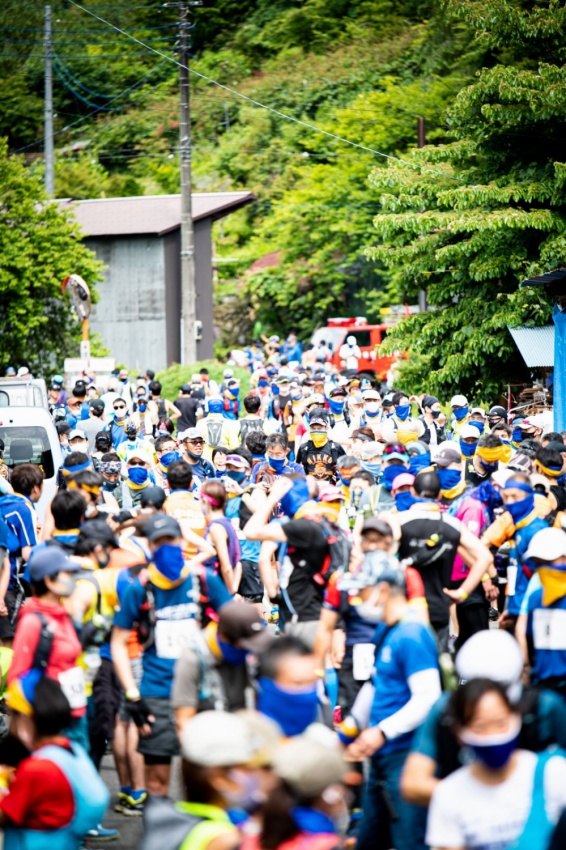 Carrying your own hydration was a requirement because the course was billed as having no aids stations. To my surprise, there was in fact a single aid station near the end of the course, which provided runners with small bottles of water and a portion of salt. While this unexpected aid station was indeed a warm sight and a nice little boost in the final third of the course, it was no substitute for the required allotment. If the weather had been hot and humid, hydration would have been essential.

The highs and lows the mountain puts on the runners could easily make for some dangerous situations if you’re not able to stay hydrated and fueled properly. On this day in particular, I feel like 1000ml may have been a bit more than necessary and I often felt myself drinking too much, but better to be over prepared than otherwise.

Finally I should note, as I discovered, if you’re similarly over-hydrated mid-race and find yourself searching for toilets, you should know that there is just one bathroom on the course located by the temple. I did witness a few runners duck off into the bushes to relieve themselves, but this is frowned upon by the organizers. 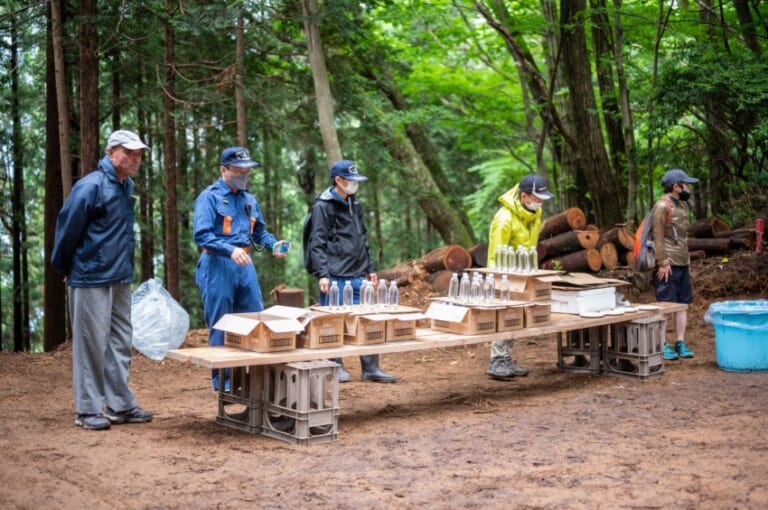 On to the Next One!

My first trail race is now done and dusted, it certainly won’t be my last. It was loads of fun to test myself against the Nariki trail and spend the morning with hundreds of other trail fanatics. The experience with both KFC Triathlon Club and Samurai Sports made everything easy and fun, while the mountain trail provided the memories that my quads and I soon won’t forget.  Races are back and the mountains are calling. What will you do?

James is also a big movie and music buff, he hosts a podcast interviewing creatives on inspiration, he’s a sports fan of both team and endurance sports and a bit of a craft beer aficionado. Look to James for the perfect long run playlist or the best brew recommendation after you finish your next marathon or trail race.

Coming from Canada, James has always been interested in the outdoors, mountains, skiing and climbing but his passion for running really took off as the Corona pandemic forced people to stay at home. Now, as normalcy starts to creep back into the world and organized races are a thing again, James seeks to challenge his mind and body on the roads, mountains and trails.