Into the Wild: Scaling Sugadaira

Throw two triathletes onto the trails…it’ll be fun, they said! Part 2 For Part 1, click here. 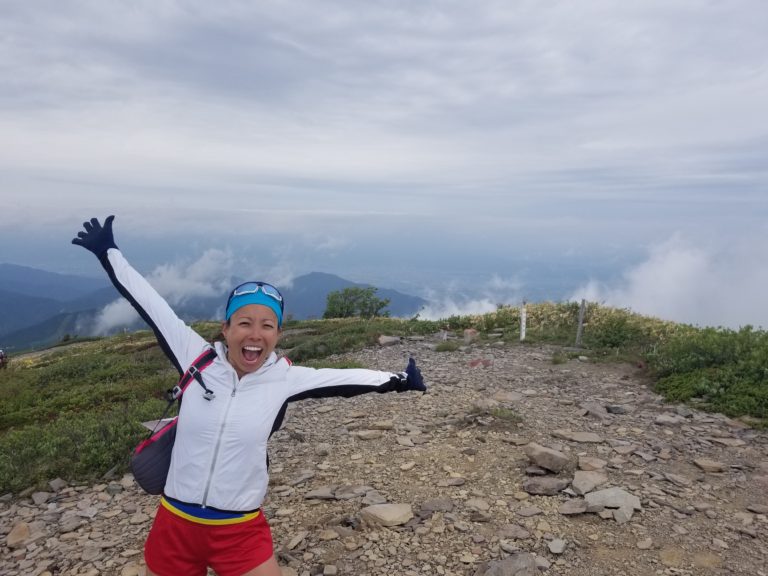 Before Sugadaira: “Have You Looked at the Elevation Chart?”

On the Wednesday before the Skyline Trail Sugadaira race, the Significant Other (SO) and I arrived a Narita Airport, slightly battered and fifty shades darker after completing Ironman 70.3 Hawai’i – but also rejuvenated from a few days of R&R in Kona.

In hindsight, a 22KM in the mountains of Nagano one week after having swum 1.9KM, cycled 90KM, and ran 21KM in one day, plus accounting for the extensive travel time is not something we would wholeheartedly recommend. But I had watched the video on the event Facebook and decided we HAD to register. I wanted to see the amazing scenery with my very own eyes and to be fair, the SO raised no objections when I suggested we register.

After all, what’s a half marathon after a half Ironman? 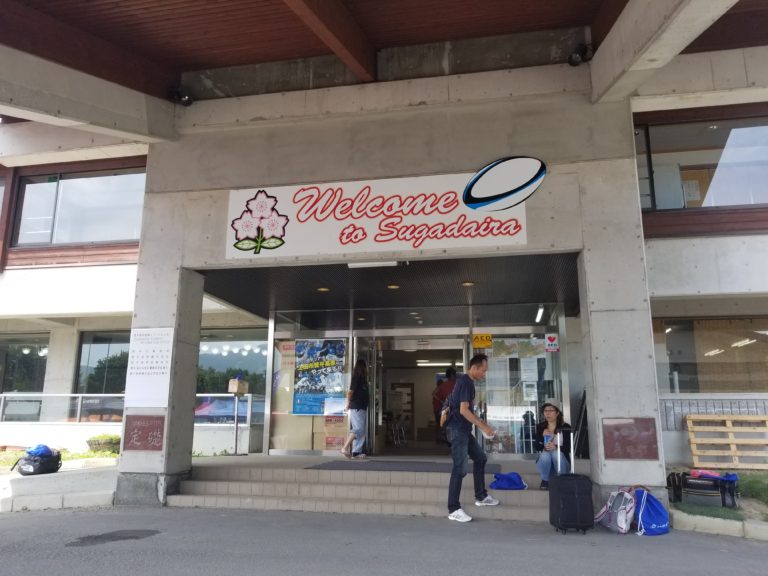 On Saturday morning, we boarded the shuttle bus to Sugadaira and began to study the course. It didn’t take much scrutiny before the SO voiced some concerns.

Specifically, he stated, “Have you looked at the elevation chart? 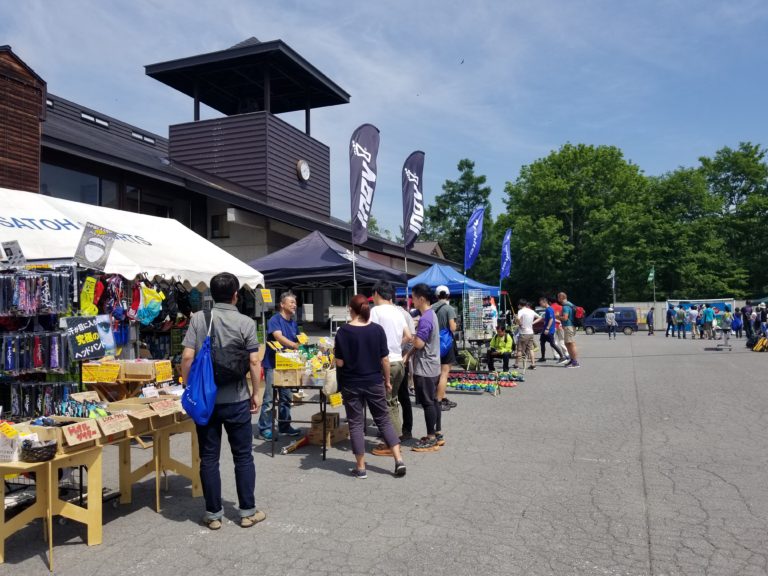 With the SO’s help, I began to gain a better understanding of the course that I had signed us up for. It was around this time that I began to think that this might be tougher than I had anticipated. 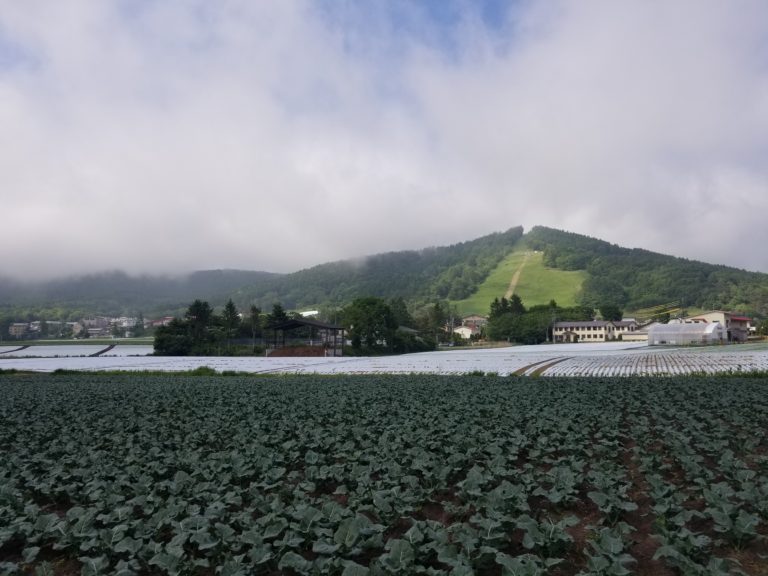 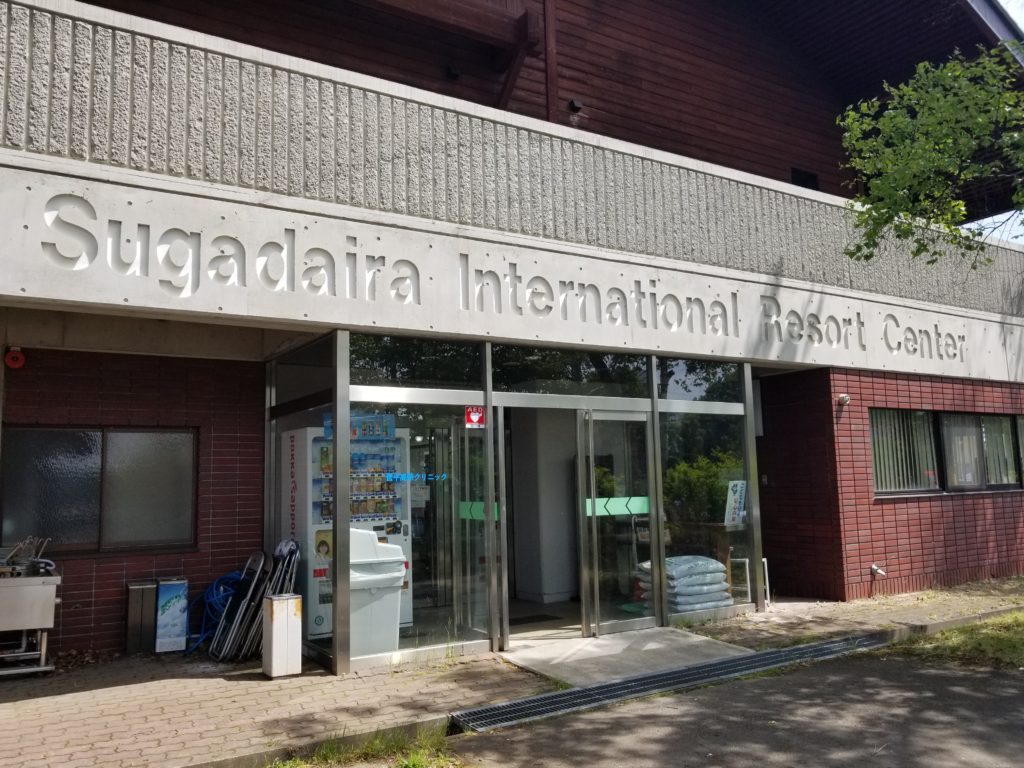 Sugadaira is a small, sleepy village tucked away in the mountainous regions of Nagano. Set at an elevation of approximately 1,100 meters, Sugadaira is home to several ski courses and a popular place for winter sports enthusiasts.

Unless you’re driving, accessing the race site using public transportation may be challenging. From Tokyo, take the shinkansen to the nearest major train station, then take a local bus to the race site. One way will cost a little over $60; similarly, highway tolls would be about $50.

Fortunately, the event organizers had a charter shuttle bus service departing Shinjuku at 0900 on Saturday and returning from Sugadaira at around 1930 the next day after the race.

The buses were clean, spacious, and took about 3.5 hours each way with two 20 minute bathroom breaks at highway rest stops. The roundtrip fare was reasonable considering we didn’t have to drive and it dropped us off at convenient locations. For solo runners (or pairs, like us), this was an economical and convenient option.

The event organizers and the Sugadaira community work closely to ensure a positive experience for athletes. Another perk of the Skyline Sugadaira Trail Run Race is the included accommodation.

We know the challenges involved in attempting to book a night at any type of lodging in rural Japan (basically, anywhere that isn’t a major city with chain hotels). Many only have websites in Japanese and accept reservation by phone, fax, or email (if you’re lucky) in Japanese. Not having to worry about finding accommodation was a huge relief!

About two weeks before the race, we received an email in English directly from Alice Lodge regarding our stay. They accommodated various requests for single/shared/family rooms, drove athletes to and from the race site, and provided dinner (included) as well as breakfast (optional). 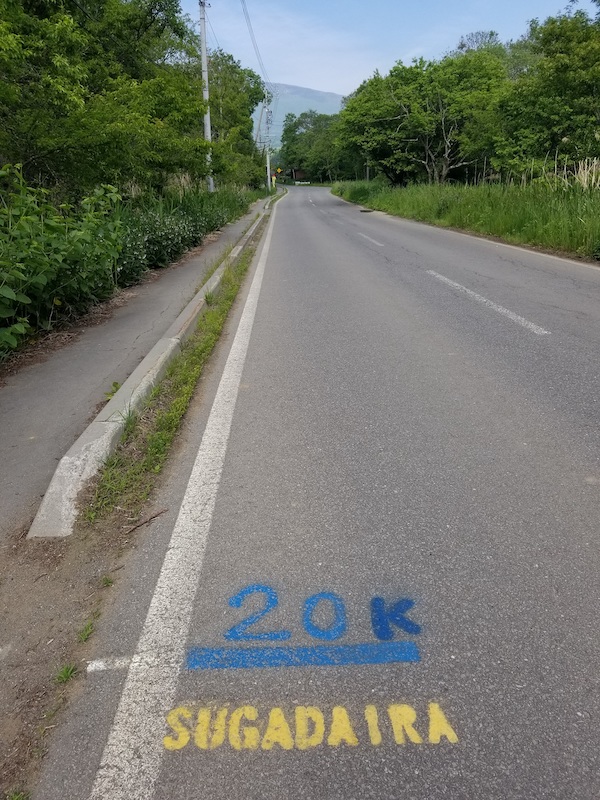 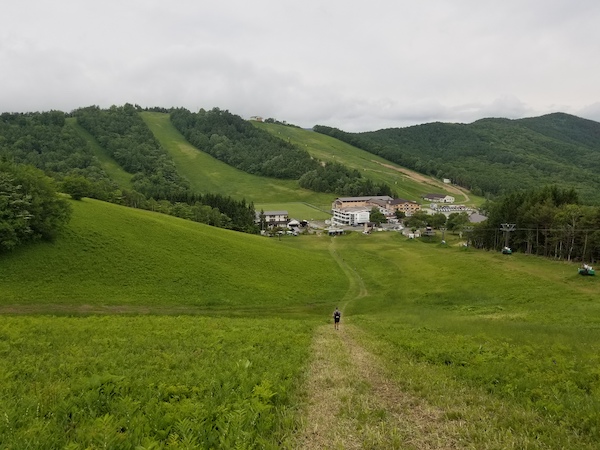 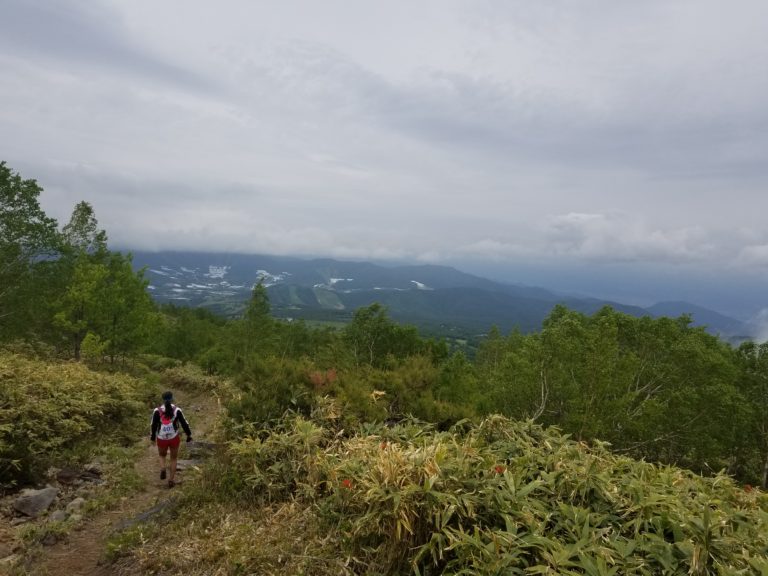 Our day started around 0600, right around the time the 50KM runners began their race.  Our 22KM didn’t start until 0900 but we made sure to depart our lodge with all of our belongings by 0805; within 15 minutes, we arrived at the Sugadaira International Resort Center.

Once at the race site, we set our things down in the bag drop area to begin preparing for our imminent start. I stretched, nibbled at my 7-11 pancakes, and took a few photos. There were no nerves – we had already discussed that this would be a long workout and not a race.

At the start line, we hung out at the back of the pack and leisurely shuffled through as the air horn signaled the release of the hordes. After a short run on the asphalt, we were greeted by the steep inclines of a ski slope – one of many we would conquer throughout the course.

The trail run had been just as tough (if not tougher) as I had imagined it to be. Over the course of 22KM , we climbed approximately 1,100 meters (3,500 feet) and trudged through a broad range of largely unsteady terrain including gravel, silt, asphalt, large rocks, and even stairs. Much of the trail was quite technical – both the climbs and descents were steep with unsteady footing.

Unused to the unstability (triathletes that we are), my ankles were frequently on the verge of rolling and I became increasingly hesitant to take chances. We have Ironman 70.3 Jeju in early July and we were keen on showing up without lingering pains or injuries! 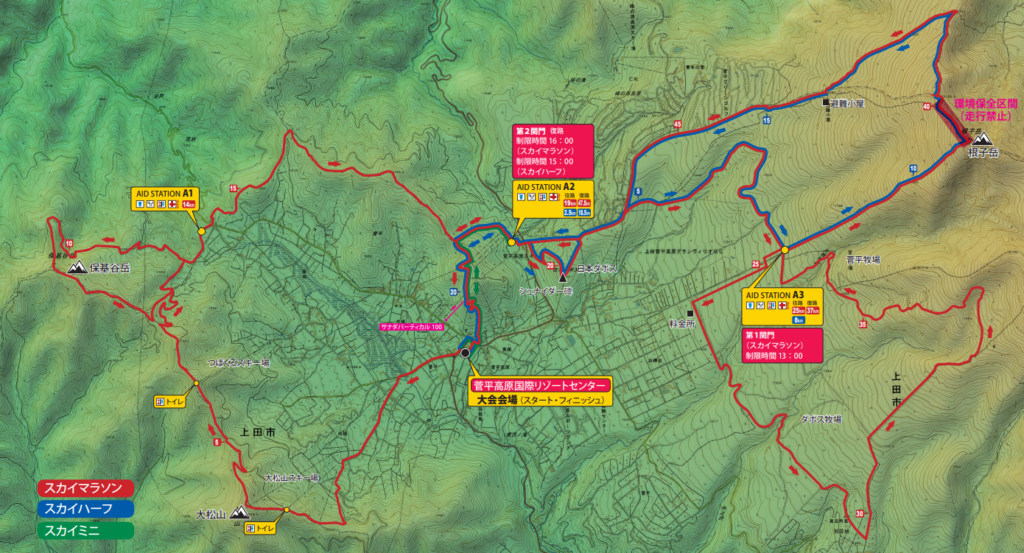 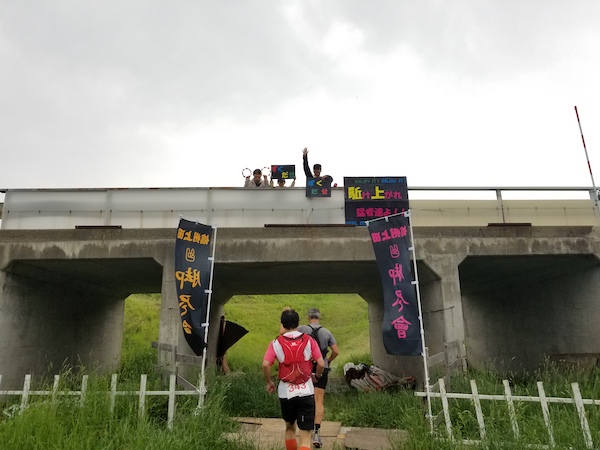 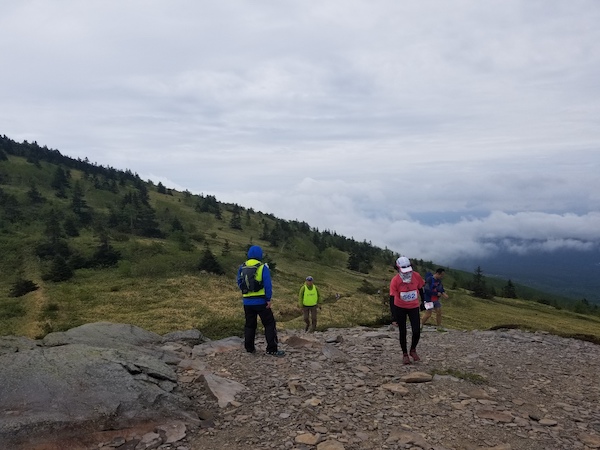 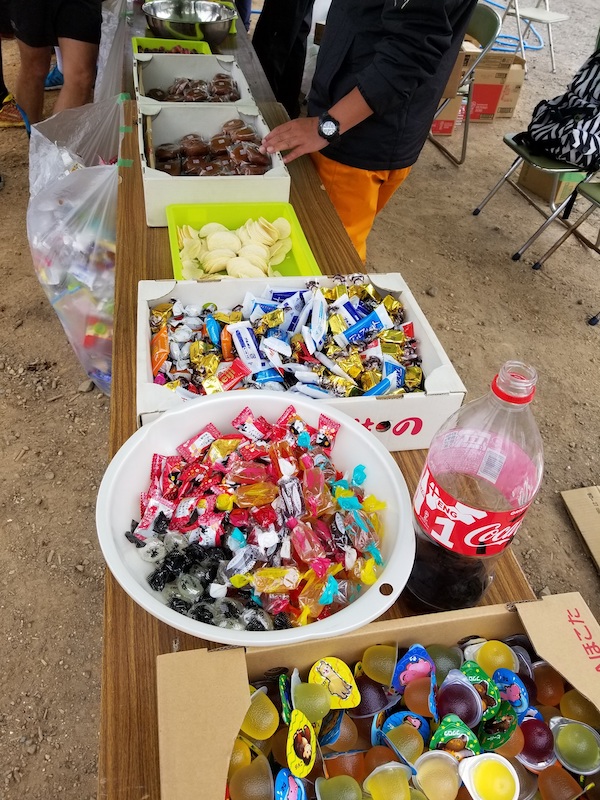 We used the public bathrooms at the 8KM aid station before the steep climb but there were bathrooms, water, medical personnel, and various forms of nutrition at each of the aid stations. 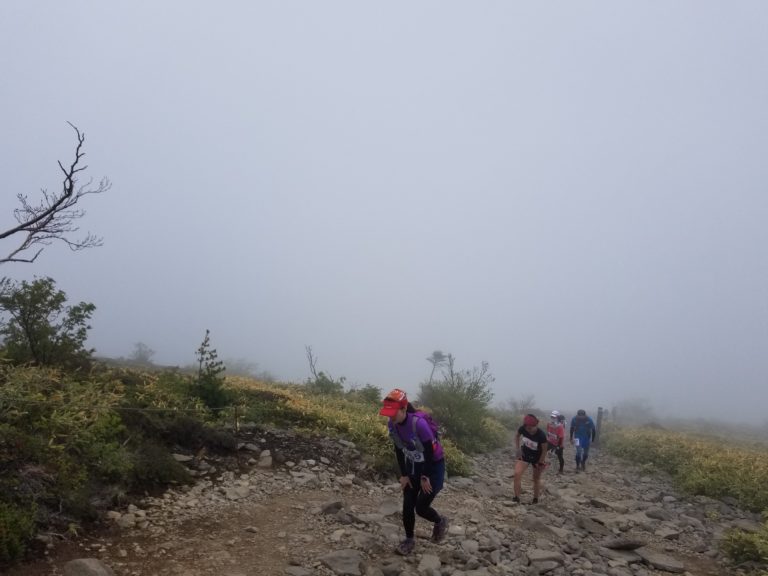 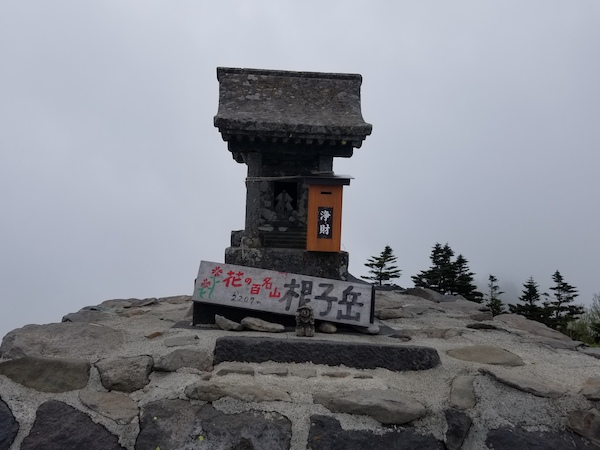 The soreness was already settling in on the bus ride home.  From this, I knew the next couple of days would be painful but I was not ready for the world of sore that descended upon me.  Not even the days after a half Ironman hurt so much!  Monday and Tuesday were spent waddling around and luxuriously taking every manmade invention for human transportation available.

There’s nothing like feeling as though you’re a fit, triumphant triathlete – only to be absolutely destroyed in the recovery process by a half marathon distance trail run in the mountains! 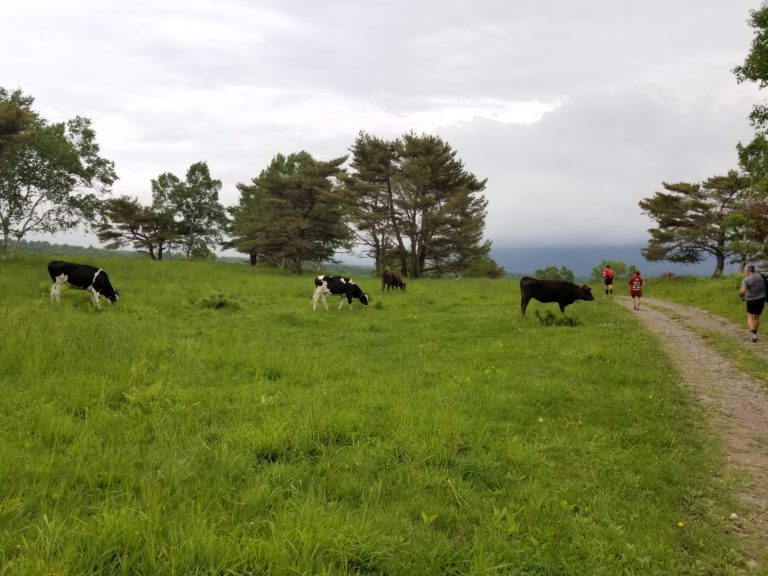 The Views! Wow, Nagano hasn’t failed us yet. The mountains, the fields, the foliage…it’s all a Naga-yes for me.

Race Organization! Good signage, well-stocked aid stations, and friendly race staff + volunteers before, during, and after the event. Limited number of runners meant no congestion or bottle-necks.

Race Logistics! With the shuttle bus, arranged lodging, simple packet pick-up, and even free usage of the bath facilities at the Sugadaira Hotel across the street, we were not in want of more.

The Challenge! The course is no walk in the park – whether you’re doing the 200 meter vertical run on Saturday, the 5KM, 22KM, or even the 50KM on Sunday, the Skyline Trail Sugadaira Run Race was an exhilarating race with generous cut-off times.

Let's Work It Out

Shuttle Bus Arrangement After emailing the shuttle bus company, we received no response for over a week (despite 2 more follow-up emails). A phone call later (in Japanese), it was revealed that the invoice had been physically sent to our address and the balance was to be paid at a 7-11.

Unaware they would actually send anything, I hadn’t submitted my complete address. More importantly, I was traveling abroad and had no way to make their arbitrary payment deadlines. This was all very inconvenient – what happened to online payments!? However, for those coming from abroad, Samurai Sports handled the 7-11 payments and ticketing. 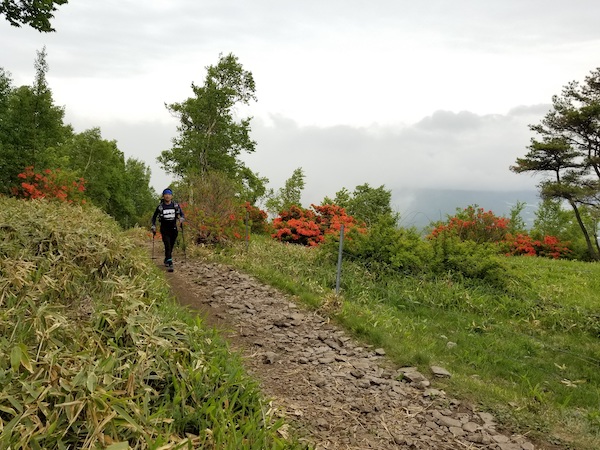 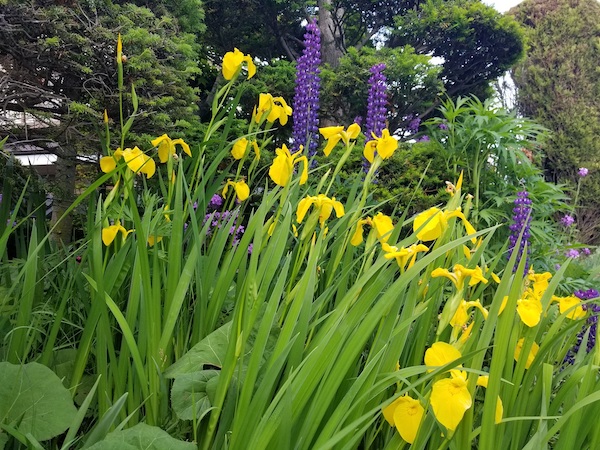