Ise Shima Triathlon: Worth It!

Unlike the triathlon in Biwako not too long ago, I wasn’t the only gaijin at Ise Shima. In fact, I wasn’t even the only triathlete representing Triathlon in Tokyo –  Alf and Elena were also there.

In addition, fellow triathlete and Samurai Sports staff, Faith, was there to work though not to race. And to yell! Huge, booming, cheering voice for such a small package.

There were also four team mates from the Kyoto Tri Club (KTC), as well as two other club members there to cheer us on.

And of course, my number 1 supporter, Makiko.

No lack of support here!

I had never been to Ise but have always wanted to, so this was a good excuse to head down there from Kyoto. It was an easy 2.5 hour drive and we stopped over at one of Japan’s most important Shinto shrines, Ise Jingu. It was well worth the 90 or so minutes it took to look around the inner shrine complex.

The Ise area is very scenic and they are still living off the coat tails of hosting the G7 summit back in 2016. There are still lots of signs boasting about that.

We went up to a lookout for some excellent views of river systems, extensive forests, and coastline. Has to be one of the greenest places I have been to in Japan! The motto of the race is something like “Come for the race, stay for the weekend”. Absolutely true in this case. (Editor’s note: This motto was created by Samurai Sports)

The other thing about Ise is the homage that they pay to Ise ebi, the Japanese spiny lobster. Statues and signs everywhere. We didn’t partake this time, but still enjoyed some great fresh seafood. 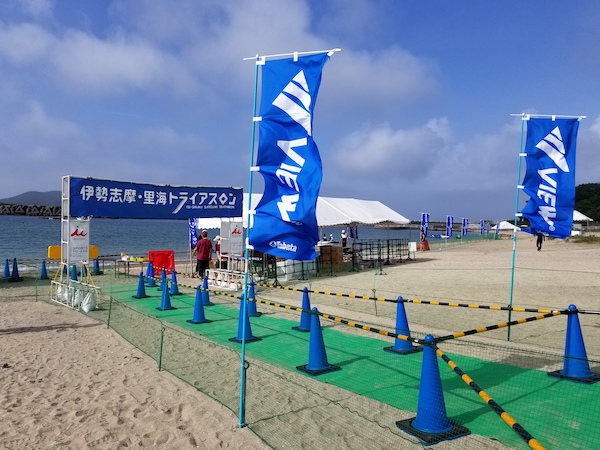 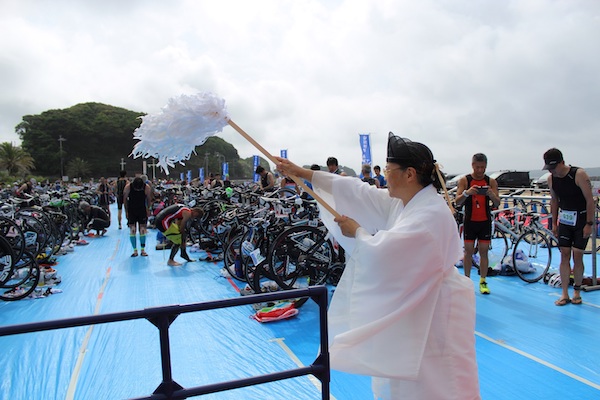 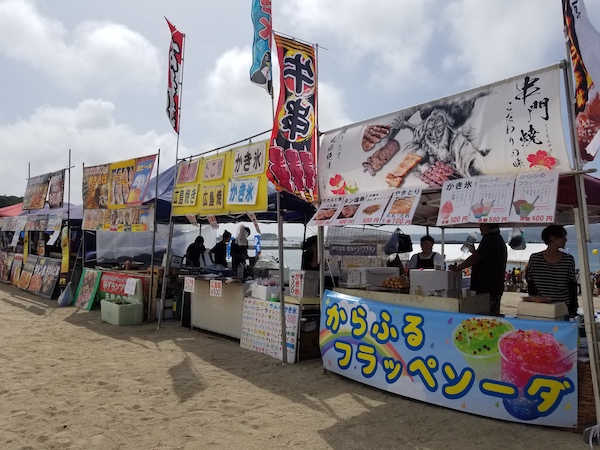 The race was held at Oyahama Beach, which is a good, safe swimming beach. Strangely enough the registration process was super easy.

Even more strangely for a race in Japan, the race briefings were not mandatory. It seemed to be a case of “work it out for yourself”. About time!

This is not a official JTU ranking series race, so it was very relaxed. Maybe this is why this is the number 4 triathlon in Japan?

The course is very straightforward so there wasn’t much for them to talk about with the exception of their fixation on offering a “swim skip” and the requirement (by threat of DQ) to carry at least one bottle on the bike.

The race started late at 09:30 with 3 minutes between the 3 waves. This meant for a bit of a sleep in and a relaxing, late breakfast. I had chosen B&B Forest Shima about 15 mins by car away from the start which turned out to be a very good pick.

Run by a super friendly young couple, it was newly renovated and had just reopened a few days before. The rooms were huge (62sqm with 4 beds) and only cost ¥10,000 per night for two.

The swim was one of those swims for me. 2 x 750m laps with a 25m run on the beach in between. Normally it’s just a short run around a big cone or such, but this race even had an aid station to stop at between laps. Many stopped for a drink but I did not.

I started in the third wave so I had to battle though many swimmers from the first two waves (about 500 in front of me) which slowed things down as the course was tight in some sections.

The water was warm, flat, and nice to swim in. Wet suit mandatory as usual. It wasn’t perfect, but it certainly wasn’t the worst course I have ever swum.

After the swim, I made a rookie mistake as I was rushing to beat two KTC team mates out of the water and out of transition by forgetting to hit lap on my watch to switch the timing to the bike. 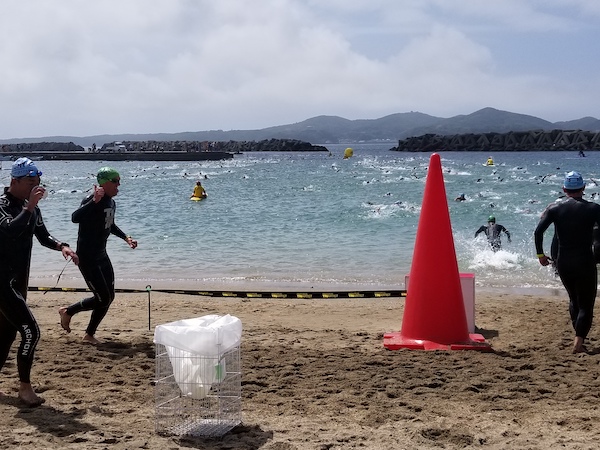 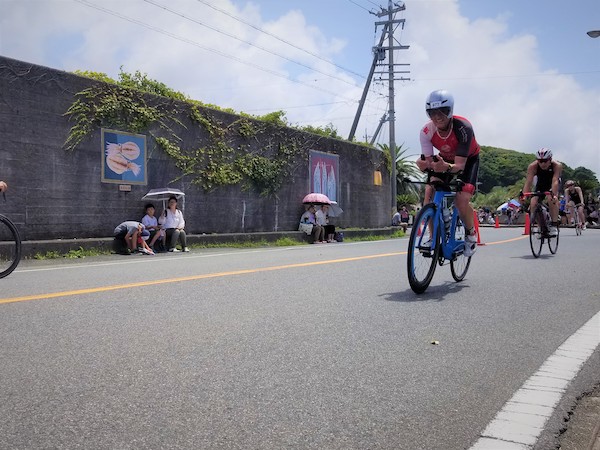 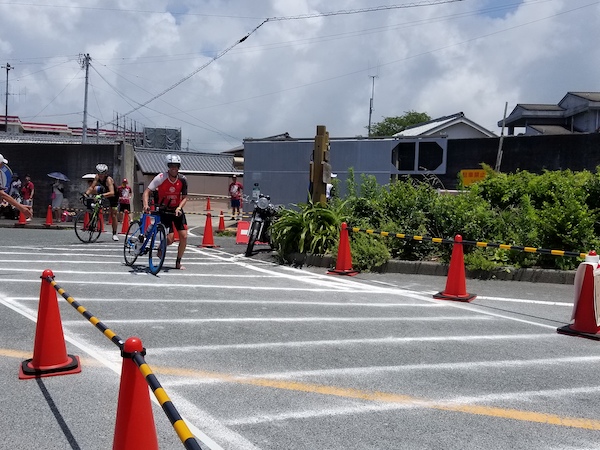 My failure to hit the lap button on my watch was gleefully pointed out to me on Strava the following day as it looked I had completed a 41.5KM swim over land. Luckily, I had the bike time on my Wahoo ELEMNT. But I didn’t have a swim time except for the official time.

The bike was very different than the my previous two races in June which were both multi-lap with lots of u-turns and corners.

Here, it was two 20KM laps with some rolling hills and tunnels. Only 5 U-turns needed. The rollers meant there was 451m of climbing over the 40KM. Nothing too steep.

The course looked a bit tight to me when the slower swimmers hit the course, but I didn’t have a problem. I was just too darn slow that day! Alf and I rode the course the afternoon before which definitely helped.

The run was one of the most scenic that I have done here. 2 x 5km laps with about 80% along the coast which had the usual tetra-pods and seawalls. And a section downtown through a shotengai that was capped by a small, but steep hill. Lots of people out cheering and lots of showers, hoses and ice.

It was stinking hot by the time the run started and about 90% humidity. The two aid stations (four passes) were well stocked and manned by very enthusiastic young people.

I melted in the sun, stopped at every aid station, shower and hose and just scraped in under 60 minutes. 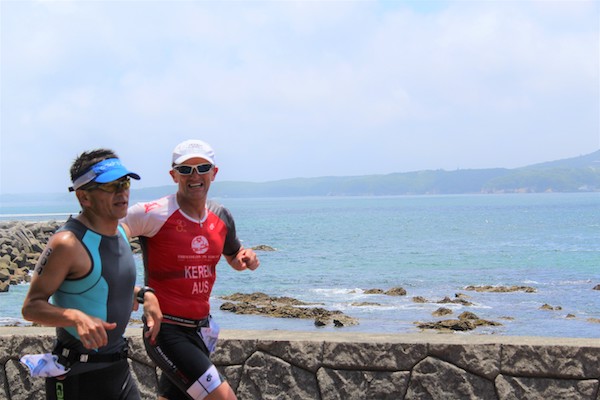 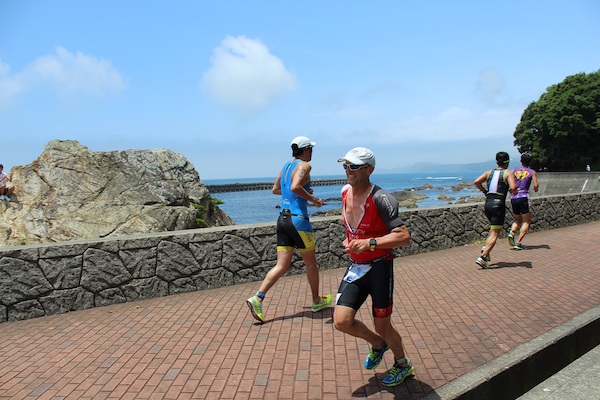 As I wasn’t racing for JTU points (zero for this race) and had been passed early on the bike by two KTC team mates, I decided just to cruise it…

But I didn’t expect that I would do my slowest OD time since my first OD back in 1988! Definitely a slow course.

Only two guys out of 755 starters broke 40 mins for the run leg, so it really was a tough, slow course. Alf and I had chatted earlier about the slow times recorded last year – we now know why. I ended up 12th in my AG out of a big 74 starters. Got in some good speed work for my Ironman Korea training. 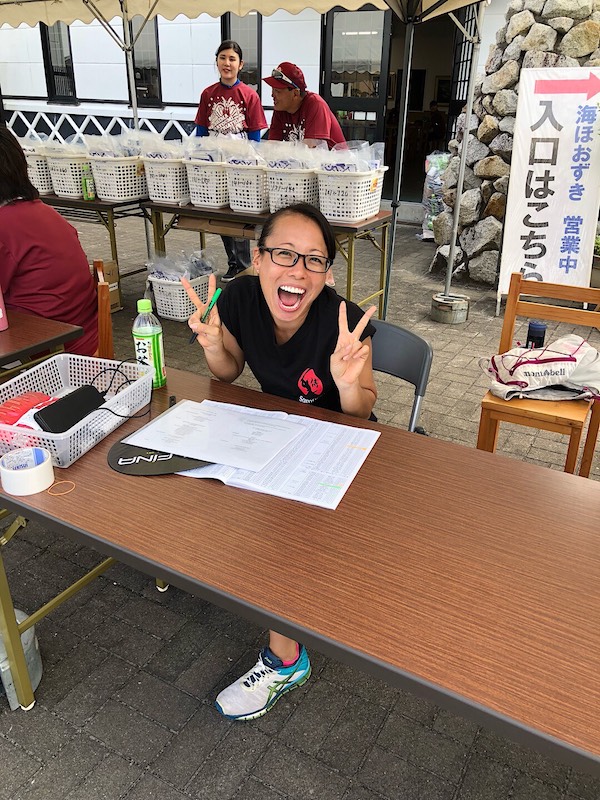 Read another review of the 2018 Ise Shima Satoumi Triathlon