Race Report: Closing Out the Year at the Mt. Mitake Trail Run 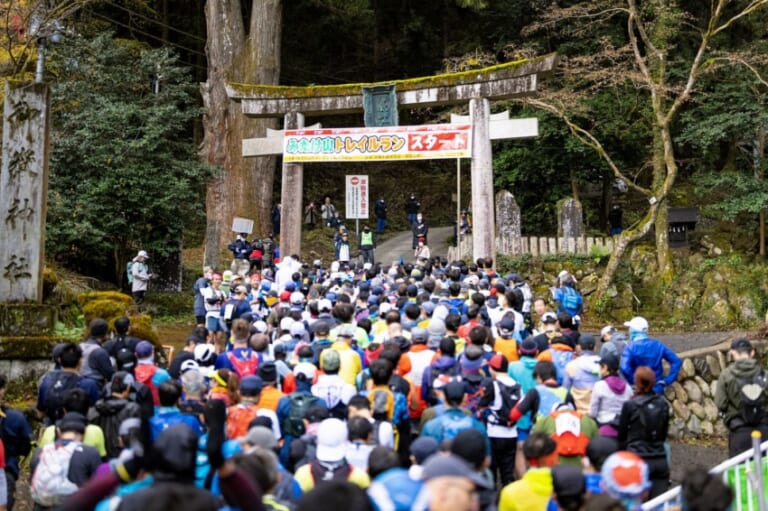 For many parts of the world, the race season usually ends in mid-November, even earlier when it comes to trail and mountain races. Here in Japan however, particularly in the Kanto region with its mild temperatures, the trail season usually extends to around mid-December.

2022 has been my first year entering trail races here in Japan, joining the Nariki Forest Trail Race in June, then the Shinshu Tenku Trail Run this past October. They were both challenging, and a lot of fun. Even though temperatures were plummeting in early December, I was hoping to squeeze in one more race before the year ended. This brings us to the 23rd edition of the Mt. Mitake Trail Race (or the Mt. Mitake Mountain Climbing Race as it’s also known), put on once again by the seasoned pros at the KFC Triathlon Club. 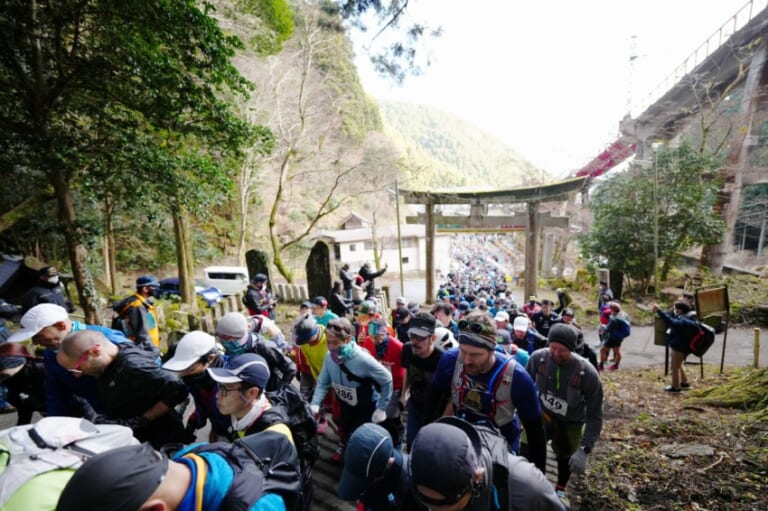 The race, like many others in Japan throughout the pandemic, had been on a hiatus since December 2019. The Mitake race has a long history in terms of trail races in Japan and has been a popular event due to its approachable distance and proximity to Tokyo. It was good to see it back on the calendar.

While this year’s edition of the race didn’t quite reach its pre-pandemic numbers of over 800 participants, it was still a good draw of around 500 runners, all looking to tackle a fairly challenging course of steep roads, river crossings, trails, rocks and plenty of stairs.

If there’s one thing I’ve learned from my time on the trails in Japan, it’s that if a race is labeled a trail race, it almost certainly means a mountainous trail race. Compared to trails in North America for example, Japanese trails almost always have loads of elevation and include a mountain traverse or two. The Mt. Mitake race follows suit.

Despite the course only being 13km or so in distance, (my GPS watch measured it around 11 km) there is almost 3000ft, (914m) of elevation gain and 1500ft (475m) of descending. However, I knew all of this coming into it. I also knew that uphill running was something I wanted to improve and was keen to work on. The Mitake race would be a good chance to do just that and get some vertical miles under my belt. 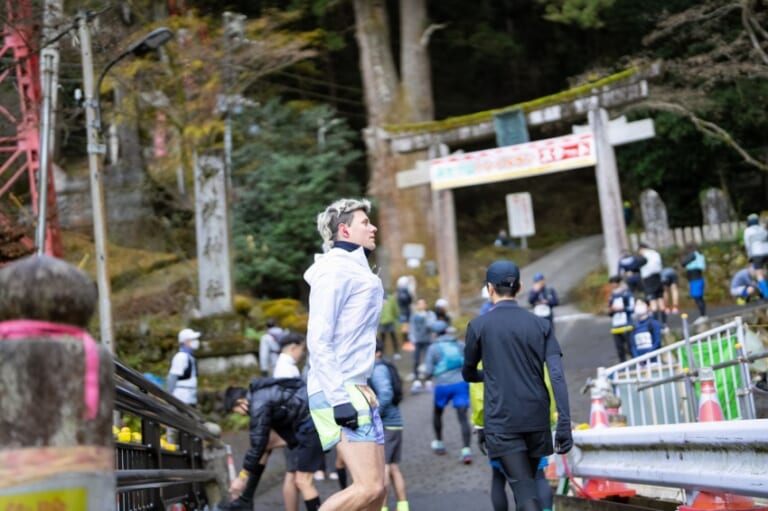 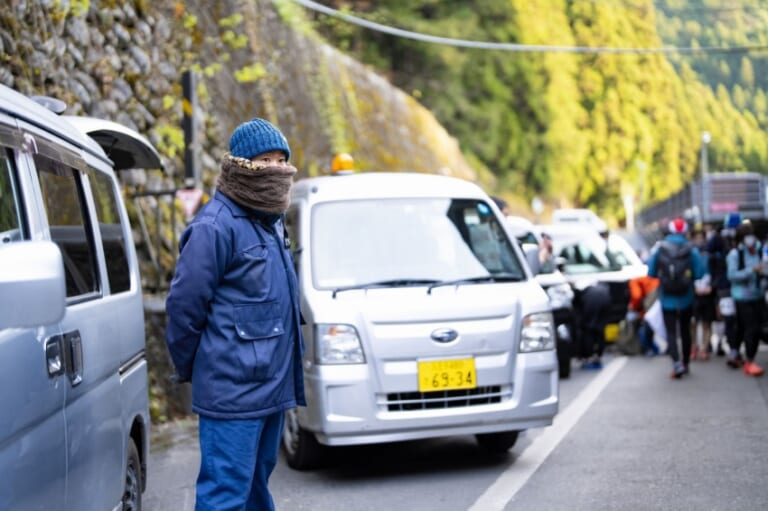 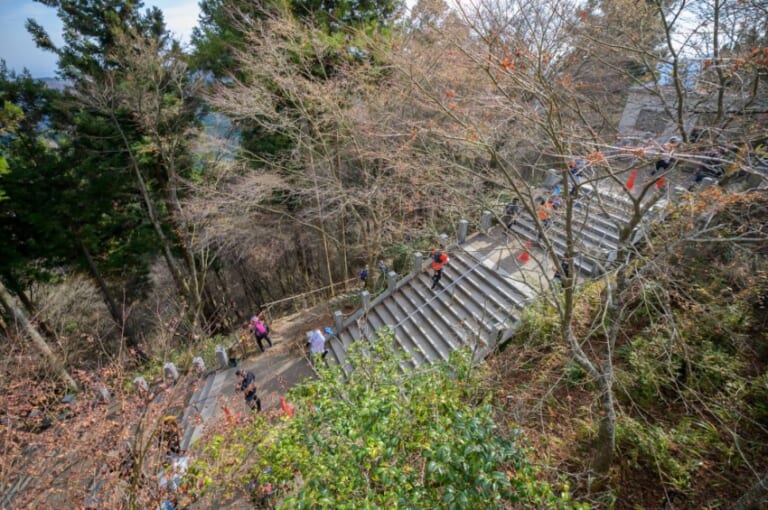 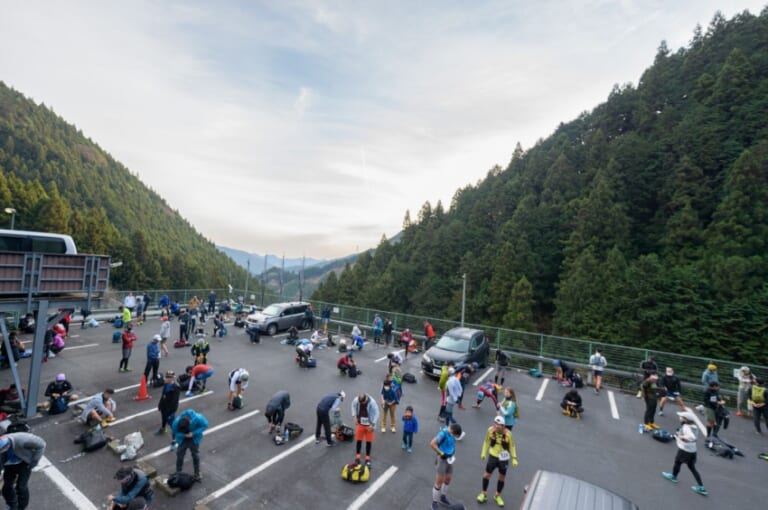 The race starts at the cable car station at the foot of Mt. Mitake, which is called Takimoto station. Access to the venue is simple enough coming from the Tokyo area. For myself coming from northern Chiba, it took just over 2 hours. You can take the JR Chuo line to Ome station, then transfer to the local Ome line and travel another 20 min or so to Mitake station.

From Mitake station, it’s a short stroll to the local city buses waiting to take runners to the bottom of the cable car station. If ever in any doubt you’re on the right track, just make a point to follow other people decked out in running attire. You’ll inevitably spot participants on the train as you get closer to Mitake station. 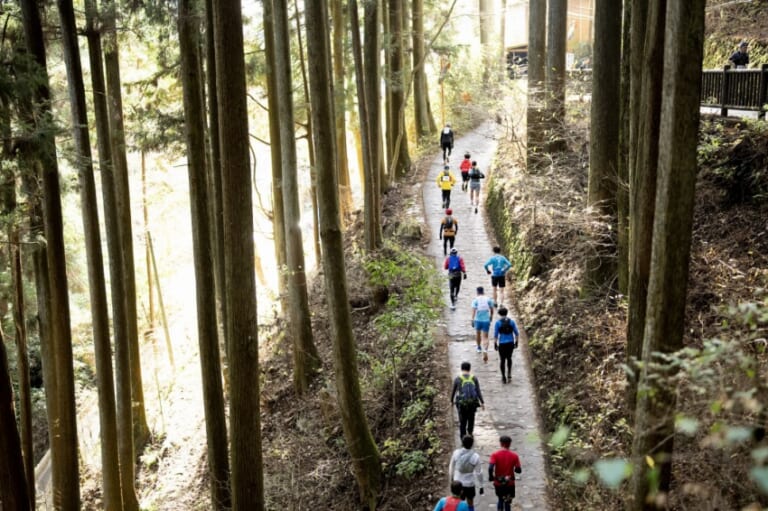 Joining a race through Samurai Sports makes everything leading up to your event stress free and easy to understand. The English athlete guide arrived in my inbox with weeks to spare and had everything I needed to know about the course, required gear and the event schedule.

One unique aspect of this race is that when you arrive at the venue you must put tags on your bags and drop them off into a corresponding truck. Your bags are then transported up the mountain to individual hot spring inns scattered throughout the tiny mountain village, where you can take a complementary soak after your run. 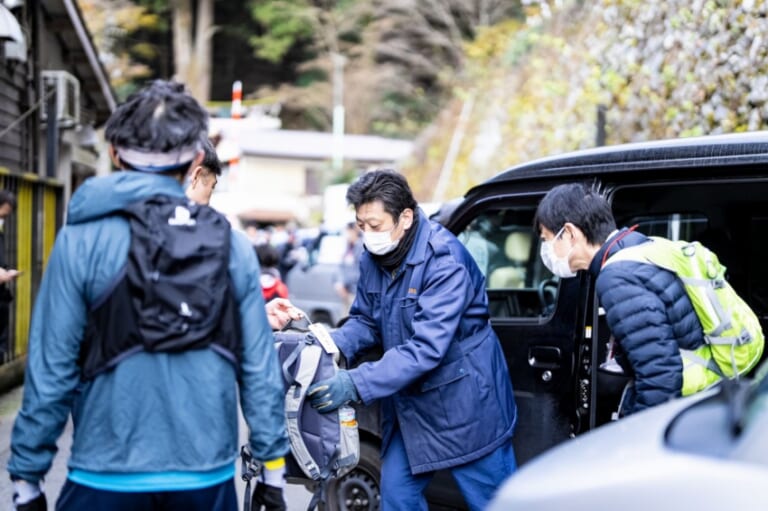 This was a fun and relaxing way to celebrate a hard effort, but meant that athletes had to arrive extra early to ensure their bags were packed on the trucks in time. The start of the race was set for 9am and the original deadline for getting bags on the trucks was 8:45am. However, this time had been changed to 8:15am the day before. If it weren’t for Samurai Sports’ helpful email letting us know about this, I may have missed the update. 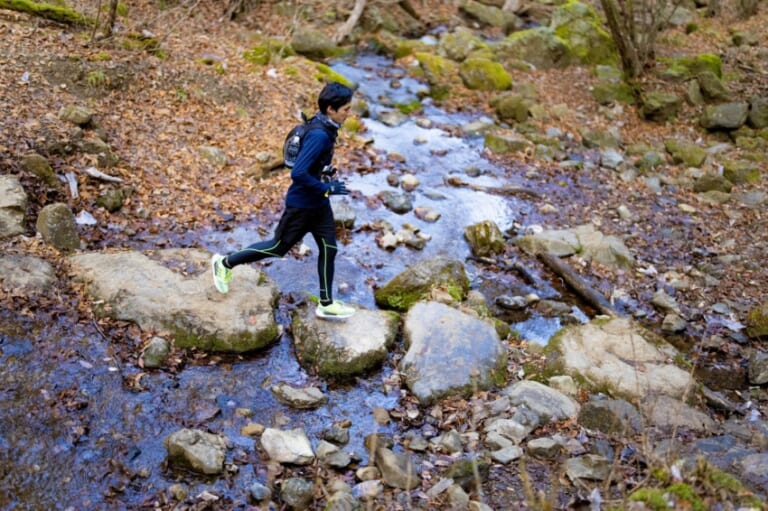 What this updated time meant for runners was that after we dropped our bags in the trucks by 8:15am we all had to wait in the cold some 45 minutes or so before starting time. For me personally, this was one of the hardest parts of the day as I couldn’t quite figure out my race attire and what to leave in my bag.

The day had originally been scheduled for rain and single digit temperatures (celsius). The weather ended up being better than predicted with slightly warmer temperatures and some sun, but it was still rather chilly. I ended up ditching my jacket in my bag and shivering for a bit while we waited for the 9am start time to come. After a bit of stretching and jogging on the spot to keep me warm, the time finally came as the masses grouped together near the startline and got ready to climb. 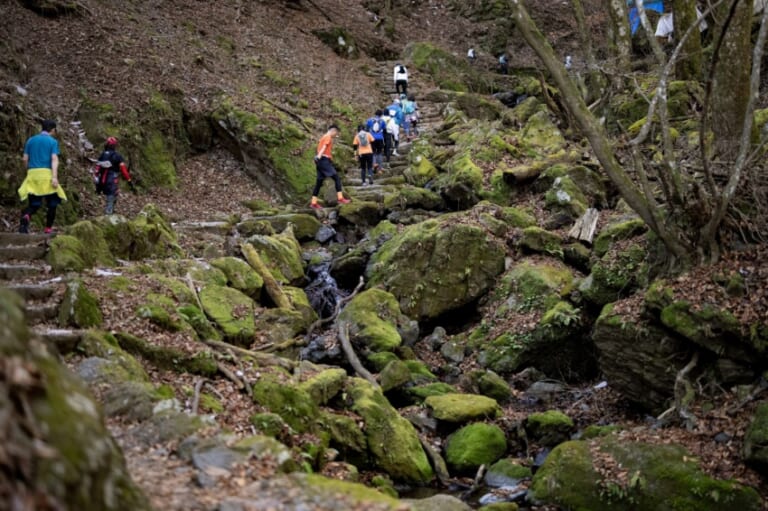 And Climb We Did

If you’re feeling confident and want to aim to finish towards the front of the pack, it’s a wise decision to get in the front of the crowd from the beginning of the race due to the narrow passes and bottlenecking. When planning for this race, I originally had this idea in my head, but in the weeks leading up to it I got sick and didn’t get as much quality training as I had hoped for. That is all to say, as the crowd began to group at the start line, I didn’t quite feel confident enough to be right near the front from the get–go.

This in hindsight was a bit of a mistake as I still performed fairly well during the race, which meant I ended up getting stuck amongst dozens of other runners unable to pass at multiple points throughout the course. For all the speedsters out there, keep this in mind. Also keep in mind that the course is open to the general public and having to wait behind groups of backpacking hikers on narrow sections was reportedly an issue for some this year.

The race’s 10km checkpoint cutoff time of 90 min may be suitable for most athletes able to run or hike at a brisk pace, but if you do indeed get stuck behind non racers out for a leisurely Sunday hike, it may be the difference between making the checkpoint time and a DNF of your race. Again, it’s something to consider, depending on the sort of race experience you’re seeking. 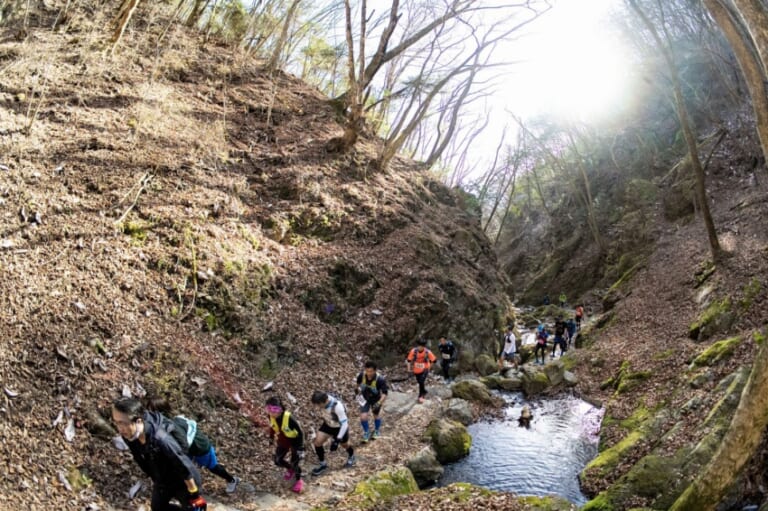 It was a bit of a relief to reach the end of this concrete section and finally get treated to a bit of time on trails and hiking paths. The next roughly 10km of course featured a nice mix of terrain. There were canyons, waterfalls, river crossings and more climbing. There were some seriously technical downhill descents and a sinister final stair climb that led us to the finish line at Musashi Mitake Shrine.

As mentioned previously, the race features a fair bit of climbing for its distance. In particular, the first 3km or so is quite challenging. It’s around 400m of elevation in this first section, all on concrete roads. For the vast majority of runners on the course, this section is almost unrunnable. I saw plenty of people giving it a shot, only to be reduced to walking seconds later. For myself, I’ve got a pretty good power-hike and found myself able to pass loads of ‘runners’ if I just kept on with my long steady strides. 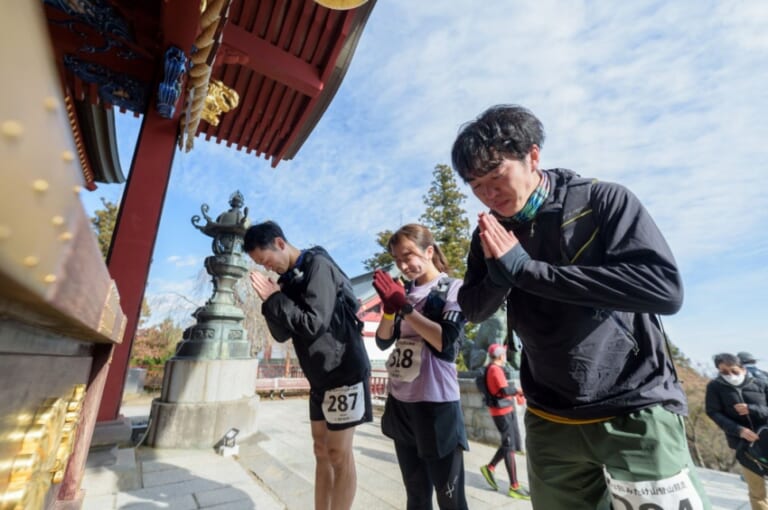 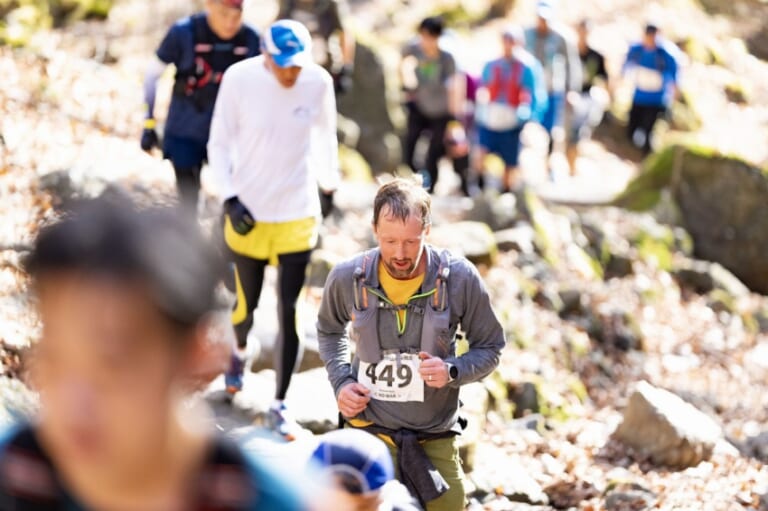 The whole thing took me about an hour and forty minutes to finish. While the race certainly was challenging, with plenty of steep climbs and descents, it wasn’t overly long and should have been over for most within a couple of hours.

Upon finishing I heard some runners proclaiming that it’s not really a ‘trail run’, but rather a ‘trail hike’ or ‘trail walk’. For most in the middle of the pack in this race, I would tend to agree. Mitake is a rather aggressive course that can only truly be run throughout by the top in the field.

That said, don’t let this fact detract you from joining and giving the Mt. Mitake Trail Race a chance. It’s still a fun morning out in nature with some great views of both the natural surroundings and the quaint little mountain village, filled with traditional houses, shops, and inns sprinkled throughout the course. 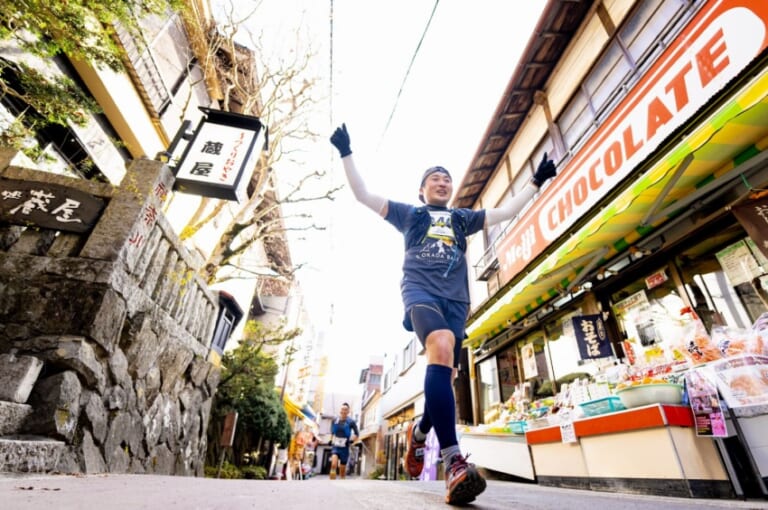 Celebrate with a Soak 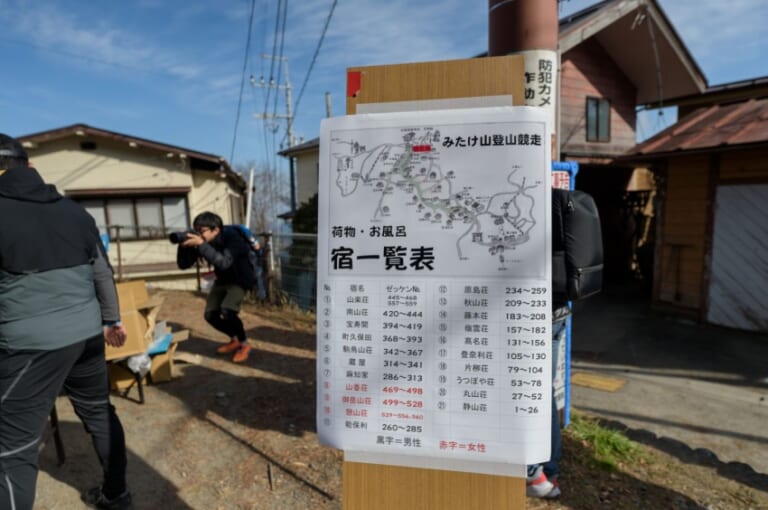 Along with a snazzy blue long sleeve tee, finisher entitlements included a free soak in a mountain-side hot spring. I took full advantage of this uniquely Japanese perk and relaxed for a bit in the tub, before making my way back down the mountain.

Athletes are given the option of a free cable car ride down Mitake, but I took the opportunity to enjoy a little more of the outdoors and leisurely hiked down the mountain along with some fellow participants. This hike may vary upon your route down, but from where my hot spring was situated, it took me less than an hour and clocked in at around 2.5km back to Takimoto station where I caught the bus back to the JR Mitake train station.

A Getaway from the Everyday

It’s refreshing to know that this race is back on the trail calendar and that there’s plenty of nature, climbs and crevices just an hour or so away from the madness of the mega city.

I’d recommend the Mt. Mitake Trail Race for novices and pros alike. The course isn’t too intimidating at just over 10km in distance, but can be as challenging as you want to make it depending on how hard you push on the relentless uphills and the steep downhills. 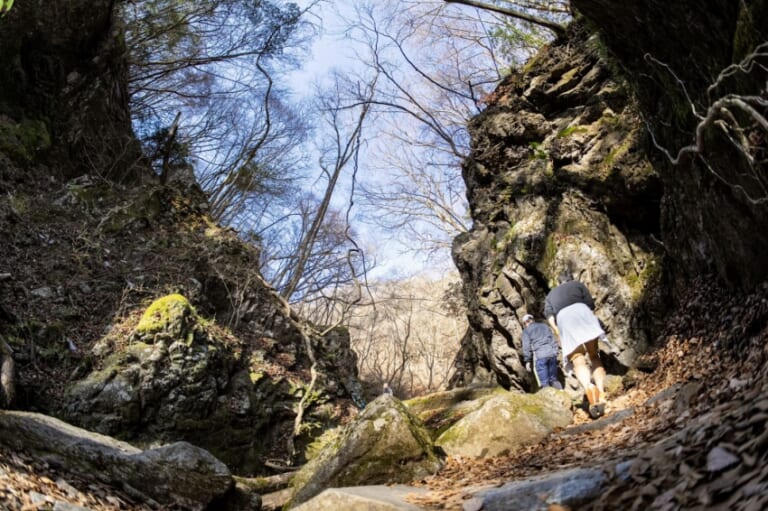 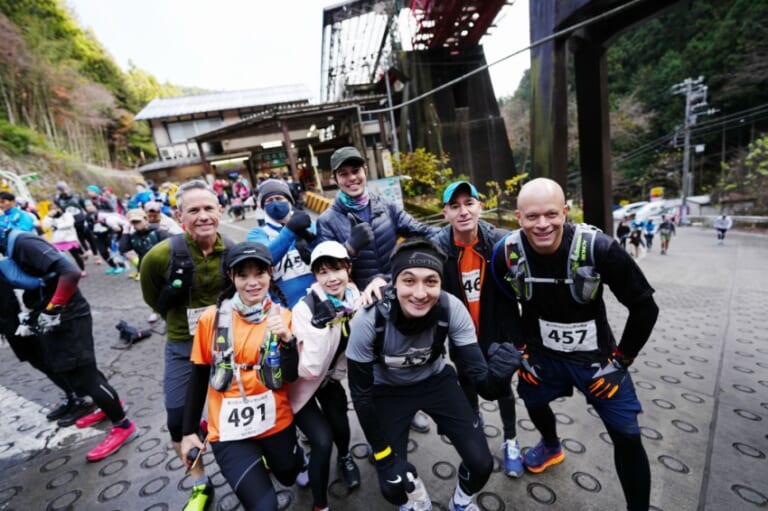 And with that, my 2022 race season has come to an end, with the intention to get back out there in the new year and beyond. If you’re like me and are already starting to map out your 2023 schedule, it’s well worth noting that another one of west Tokyo’s long-running trail races is already scheduled for its 25th edition, the Ome Takamizusan Trail Race. It’s slated to go for April 2nd, 2023 – more than enough time to get your head, your heart, and your legs ready for a run in the hills. 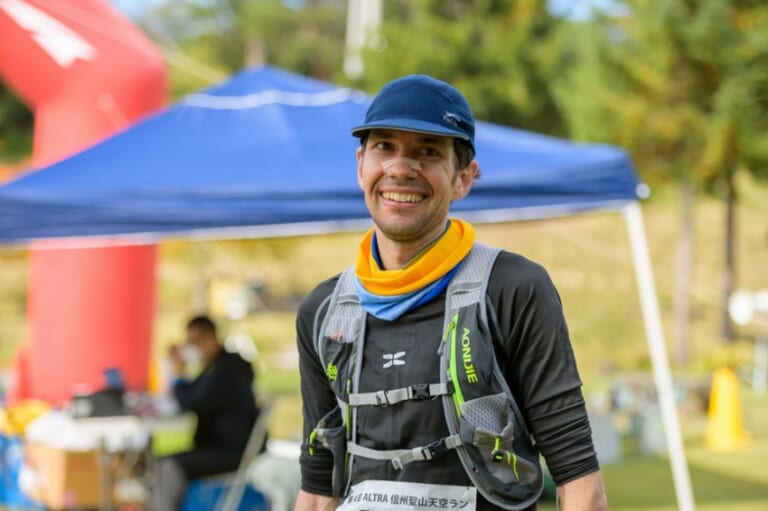 Coming from Canada, James has always been interested in the outdoors, mountains, skiing and climbing but his passion for running really took off as the pandemic forced people to stay at home. Now, as normalcy starts to creep back into the world and organized races are a thing again, James seeks to challenge his mind and body on the roads, mountains and trails.

James is also a big movie buff, he hosts a podcast interviewing creatives on inspirations, he’s a music lover, a sports fan of both team and endurance sports and a bit of a craft beer aficionado. Look to James for the perfect long run playlists or the best brew recommendation after you finish your next marathon or trail race.