Samurai Sports teamed up with the Okinawa International Triathlon to provide English-friendly support before, during, and after the event. Staff also took part in the Sprint Distance Relay.

I departed Haneda airport on Friday evening after a full day of steady on-again, off-agin drizzle.  I knew there was a typhoon brewing further south but nothing seemed amiss.  It appears that most flights to Naha were either on time or only slightly delayed but I would later find out that the weather affected international athletes flying across borders from Taiwan to the Okinawa International Triathlon.

I had called ahead to ask about bringing Bugaboo (my bike) but unfortunately, Skymark Airlines had strict regulations regarding luggage dimensions.  Bugaboo stayed home.  Though I had a bib for the sprint distance, I would have to forfeit – or get luck with the rental bike folks.  Being a size 44 frame, this was unlikely.

Pro-Tip: Do your research! Skymark Airlines may offer cutthroat prices but they are not very bike-friendly.

Upon exiting Naha International Airport, I was hit by a wave of intense humidity. Welcome to the tropics! A quick ¥1,000 cab ride got me to the Naha Beachside – my home away from home for the weekend.

Just as soon as I tucked in for the night, I noticed that the event organizers had released new event updates while I had been in the air. Ruh roh.

It was a one-man show as I furiously translated the updates and arranged the information for immediate release to our Samurai Sports registrants. As the clock struck 1AM, I finally called it a night – my work was done and tomorrow would be a new day.

One of the Okinawa International Triathlon’s biggest draws is its convenient location in Naha, the capital city of Okinawa. The general race site area is no more than 8KM (5 miles) from Naha Airport. Hotels are a plenty nearby the race site and provide accommodation for all budgets. In terms of accessibility, this is about as easy as it gets for a triathlon in Japan!

Race packet pick-up didn’t start until 12 noon so I had the chance to sleep in and deposit a couple of extra hours in my sleep bank. It was an easy walk from the Naha Beachside Hotel to Hotel Loisir where I prepared for packet pick-up and answering what I anticipated would be a cascading waterfall of questions for the next five hours.

We welcomed all but about ten athletes that afternoon – those who didn’t pick up their race packets on Saturday could do so early Sunday morning.

Due to the changes announced the previous evening, we made sure to try to speak with everyone who signed up for the Okinawa International Triathlon through Samurai Sports.

Personally, as a triathlete myself, I know how much of stress-reliever it can be to know that there is someone you can rely on to ask questions and receive an answer from in a language you understand. With the amount of changes that happened overnight, I was happy to have had the opportunity to interact with athletes and help them plan an informed course of action for Sunday.

At about 1730, we wrapped things up at Hotel Loisir, quickly enjoyed an Okinawan dinner just down the street, and retreated to our hotel rooms. An 0445 wake up call (late for Samurai Sports race day standards!) awaited us.

Packet pick-up only on Saturday
–> Saturday and Sunday

Race briefings (x3) on Saturday
–> once on Sunday

Bike mech on Saturday and Sunday
–> Sunday only 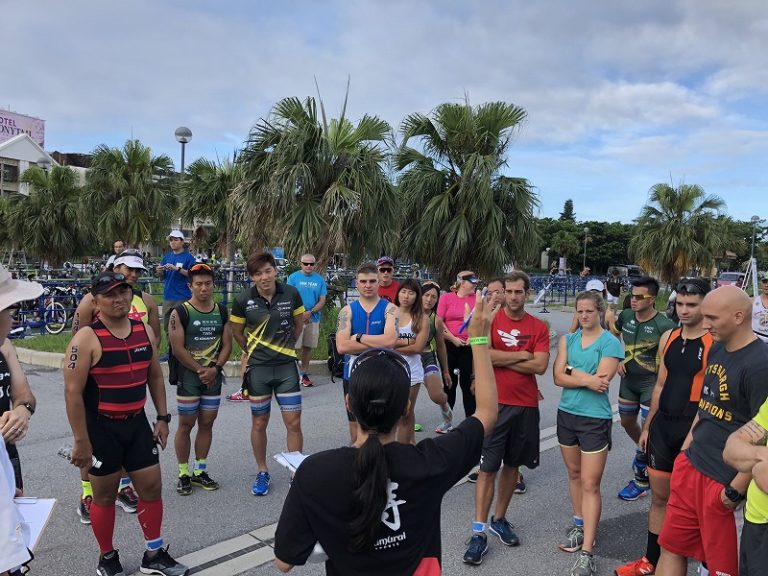 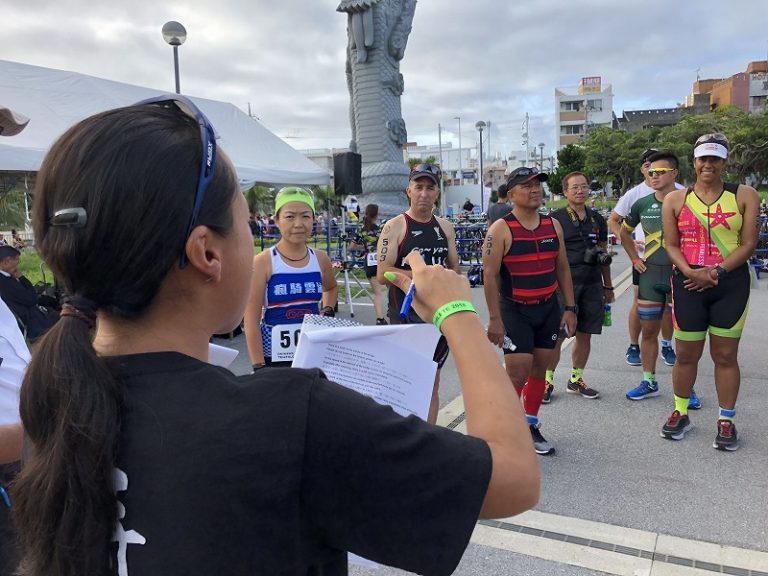 Down south, the sun rises much later so it was still dark when I grudgingly ripped myself from the bed and eventually began my stroll from the hotel to Wakasa Park at 0530.

The race site was very accessible and easy to find at the base of a short bridge. The next hour was spent ensuring everyone understood the course, turned in their race day health form, and obtained a timing chip ankle band. With a handful of folks also checking in for same-day packet pick up, the Samurai Sports team had a lot going on – thank you for your patience, y’all!

At 0700, we rounded up everyone for the English event briefing nearby the transition area. Yamanaka san of the Japan Triathlon Union (JTU) had put together a couple pages of important race notes and kindly shared these with me. I went through a quick race briefing – these things really don’t need to take an hour as is common at Japanese triathlons. The majority had already received individual race briefings at packet-pick up the previous day so after a round of questions, we were done in 20 minutes.

The sprint distance folks would start in less than an hour at 0810, followed by two waves of Olympic distance in two-minute intervals. Plenty of time to queue for the bathroom, stretch out, warm up, and complain about the rapidly rising temperature!

The race start at Wakasa Park is located in between two bridges – we would run across the less daunting one on the second run but it’s the Hakuo Bridge that’s tough as nails!

Part of the first run and the bike course, the Hakuo Bridge is about a steady 200-meter climb to the top. For the Sprint Distance triathletes, that’s almost 1,200 meters of climbing; similarly, Olympic Distance finishers rode uphill for approximately 2,800 meters! 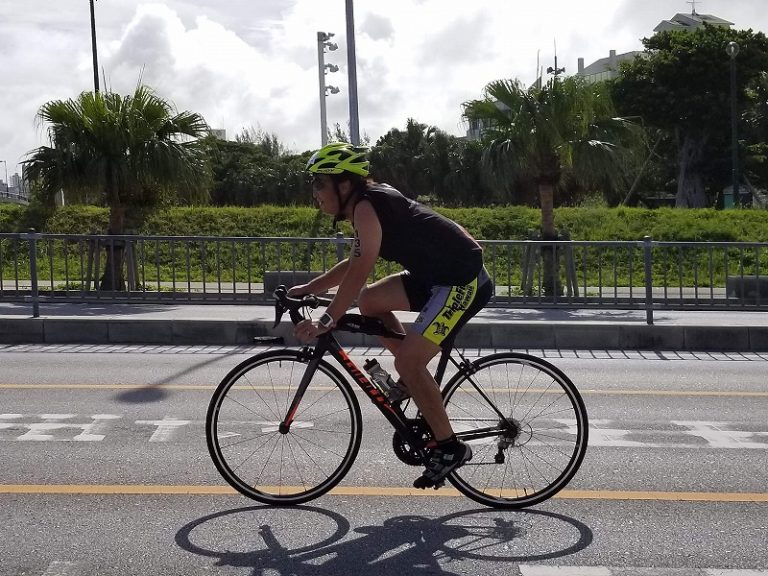 The grueling bike course meant that some athletes had to seek medical care and settle for a DNF. On the other hand, some were on the podium with amazing times. One wonders how they typically fare on a flat course, or what their PRs are!

For those participating in their first multi-sport event, this was not an easy race to start with. Among the more seasoned triathletes, some lost count of their bike laps, found the heat unbearable, or barely survived the repetition of hills.

In both distances, several ladies placed high overall and in their age groups. Perhaps accustomed to the humidity and heat, the athletes coming in from Taiwan had a remarkable day on the podium netting several awards.

Whether it was your first race or umpteenth, an A race or a C race, satisfactory result achieved or DNFed, Samurai Sports commends all those who stepped up to the start line on Sunday, June 17 with the grit and determination to give it their all.

I had all but given up on racing that weekend. However, A-1 and I were able to convert our individual sprint distance bibs to sprint relay bibs. This worked out well as A-1 wasn’t keen on the run but had rented a bike – I was keen to run but didn’t have a bike.

As one half of a sprint relay team, I only ran the course but the heat was relentless! Unlike the individual racers, I had the luxury of going all out on the run. I’m not much of a sprinter but considering the heat and humidity, I was glad to only run a total of 5.9KM that day. It happens every now and then but it sure feels good to be running alone with the knowledge that you are in the lead!

Running a 10K that day would have been challenging to say the least. Despite lacking a third teammate, the two-person Team Samurai came in 2nd out of 8 teams (1:12:02). Our first team event was a relative success and in the future, we hope to participate in similar team pursuits! And yes, Samurai Sports paid for our own team relay bib.

Light-weight aluminium Giant TCR SLR 2 105s were utilized for this event. Okinawa Ringyo updates their rental bike stock annually – these bikes have only been used since February 2018.

Bikes were picked up on Saturday at race packet pick-up, giving athletes an opportunity to familiarize themselves with their bike. After the race, bikes were returned to the bike mechanic tent adjacent to the transition area.

Accessibility Race site, hotels, and the beachside – all less than a 15 minute cab ride from Naha Airport.

Course Signage and Marshaling Lots of volunteers, JTU representatives, race staff, and ample course signage made the course easy to navigate despite its apparent complexities on paper.

Race Day Packet Pick-Up This was a last-minute change but a positive one allowing athletes more flexibility before their race.

English Communications and Point of Contact Yes, this is tooting our own horn, but seriously, as triathletes ourselves, it is far less stressful when things are in a language you 100% understand.

Grouped Transition Those registering through Samurai Sports were grouped together in Wave 2, by bib number, and in the transition area.

Let's Work It Out

The Course A seven-lap 40KM course will not appeal to all triathletes. Without sacrificing the central location of the race, lengthening the bike course to decrease the number of laps would be ideal.

The Weather  Out of our control but the combination of the typhoon during the week and the blazing hot weather on Sunday certainly makes one wish for more stable weather next year.

Aid Stations Though common in Japan, the lack of aid stations on the Olympic bike course brought concern to some athletes. T1 provided one aid station while the 10KM run (Olympic) and 3.5KM run (sprint) featured 4 and 2 aid stations respectively.

Bathrooms With just three port-a-pottys at transition/race start, a long line formed early before the start. Some ran to public bathrooms or ran over to a nearby grocery store for quick relief but we would recommend arranging for more port-a-pottys next year.

Naha Beachside Hotel: Budget Conscious
Mainly just looking for a clean room with a bed and shower? The Beachside Hotel lives up to its name boasting very close access to the beach and boardwalk. Has free (up to 2 hours) mama chari bicycles for rent – useful to explore the area or grab groceries (or a cheap meal) at the nearby store. Rooms vary greatly in size but generally run very small – fitting just one bike would be very cumbersome, if not impossible.

Hotel Loisir: Looking For A Little More (Without Breaking the Bank)
Pronounced “low wah zuhr” (we think), the Loisir was a race sponsor and the race hotel. They were kind enough to be the Plan B location for packet pick-up on Saturday when the weather seemed like it would not hold for the original packet-pick up at the beach outdoors.

From top to bottom, rooms to lobby, both wings of the hotel have been tastefully renovated. Great bakery and convenience store available near the lobby, as well as a grocery store less than a quarter mile away. Conveniently located near the beach and walking distance to the race site.

Spacious rooms (30 sq. meters or about 320 sq. feet) allow storage of bikes in the room with plenty of room to spare! If you’re looking to splurge a little and truly enjoy a luxurious weekend getaway, this is a sure bet.